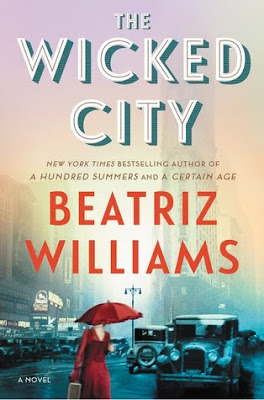 
New York Times bestselling author Beatriz Williams recreates the New York City of A Certain Age in this deliciously spicy adventure that mixes past and present and centers on a Jazz Age love triangle involving a rugged Prohibition agent, a saucy redheaded flapper, and a debonair Princetonian from a wealthy family. - For the full blurb, visit Goodreads here

I was a little surprised to hear that Beatriz Williams was releasing another book less than a year after A Certain Age, but excited nonetheless to dive into another of her novels.

The blurb for this book is super-long and convoluted, but basically the story boils down to a dual timeline of Gin, a '20s flapper caught up in a Prohibition scandal, and Ella, who moves into Gin's old building in 1998.

Williams is pretty formulaic in her stories - there's usually a strong, sassy woman and a tall, dark, and handsome man.  Here, though, she gives Gin a full and complex backstory.  We get to know Gin really well and how her upbringing influenced the woman she became.

As always, Williams creates an atmospheric feel of the time period she's writing about.  She is just so good at bringing the 1920s to life, from the language to the descriptions of the clothing to the drinking and smoking.  It draws me in as a reader and makes me feel like I'm really there.  In this novel, she focuses on Prohibition and the politics and danger involved in catching bootleggers.  Gin's stepfather is a prolific bootlegger and she is persuaded by a Prohibition agent to help catch him.

The love triangle is not as important as the blurb would make it seem.  Although she is seeing Billy, he's barely in the book.  I think his character served more as a link to Williams' previous novel, A Certain Age, as some of the same characters pop up again.  This is one thing that I both love and kind of dislike at the same time about Williams' novels - she reuses the same characters again and again.  I like seeing them pop up like Easter eggs in movies and it's fun to see how they're all related.  However, a lot of her books are marketed as stand-alones, so if a new reader picked up one of her middle novels, they might not get everything out of it that they could.  The books make sense by themselves, but there's definitely backstories and references that would be missed.

I did have some issues with the novel, but there's a possible explanation for those.  The present-day story that focused on Ella was kind of unnecessary, as there was very little to tie it to Gin's story.  And Gin's story had a LOT of unanswered questions.  But, I think this book is the start of a new trilogy, so hopefully these questions will be answered in future books.