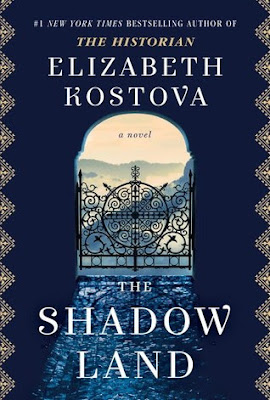 
A young American woman, Alexandra Boyd, has traveled to Sofia, Bulgaria, hoping that life abroad will salve the wounds left by the loss of her beloved brother. Soon after arriving in this elegant East European city, however, she helps an elderly couple into a taxi and realizes too late that she has accidentally kept one of their bags. Inside she finds an ornately carved wooden box engraved with a name: Stoyan Lazarov. Raising the hinged lid, she discovers that she is holding an urn filled with human ashes.

As Alexandra sets out to locate the family and return this precious item, she will first have to uncover the secrets of a talented musician who was shattered by oppression and she will find out all too quickly that this knowledge is fraught with its own danger. - from Goodreads

I received a copy of this book for free through Goodreads Giveaways.

Elizabeth Kostova wrote one of my favorite books, The Historian,  so I was very excited to get an early copy of her newest book!

Alexandra Boyd has just arrived in Bulgaria, soon to start a teaching position, when a chance encounter on the street mistakenly leaves her in the possession of someone else's bag, which she discovers to be the ashes of Stoyan Lazarov. She feels compelled to personally return them to the family, but this decision plunges her into a situation she never imagined, joined by her taxi driver Bobby, who turns out to be more than he appears.

The story felt a bit repetitive; Alexandra and Bobby search for the family and while they gain some information at each spot, it almost felt like they were taking one step forward and two steps back.  There's a lot of searching and not much finding.  Someone seems to be following them and making vague threats, but I didn't really feel the tension and danger; it could have been built up more.

I felt it took a bit too long to get to the point of the story.  It is unclear why Stoyan Lazarov and his ashes are so important to the bigger picture; he was a great violinist with a wife and son, but there didn't appear to be any notoriety or importance surrounding him.  The political situation in Bulgaria in the 20th century plays a large role in the story, particularly how oppressive the country became and how political prisoners were treated after WWII, and it wasn't until the very end of the story that I finally understood how Stoyan fit in, although the whole thing was still kind of confusing.

The story ties up very quickly and neatly, which I did appreciate in this case.  I love Kostova's writing, but I felt the story became a bit overwhelming and convoluted.  I'm not much one for politics, but I think readers who understand and appreciate political intrigue better would like this book very much.