Keep or Chuck? Purging My TBR 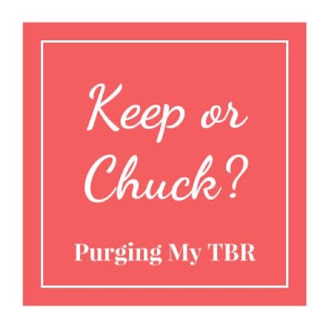 Recently I was in need of some new books to read, so I began perusing my TBR to see if any of the titles were readily available at my library.  There were a couple, so I picked them up without a second thought.  But when I got home, I realized I wasn't as excited to read those books as I had been when I first added them to my TBR, especially after looking at some Goodreads reviews.

But they were on my TBR!  That means I wanted to read them, right?

I think we as serious readers, in an effort to remind ourselves of ALL the books out there, put so many books on our TBRs, even if there's no chance we could ever read that many!  If it looks even remotely interesting, it goes on the list, which just gets bigger and bigger.

But how often do you go back through your TBR and cull those books that no longer appeal to you?  Maybe it's a genre you're not reading a lot of these days, or the book is really getting poor reviews, or you finally read the blurb after basing your initial add on a pretty cover.  Maybe they've been there so long you've forgotten about them!  Do you actually delete those books from your TBR?

I'm going through a bit of a bookish crisis with my TBR right now.  There were plenty of books I added because they sounded great at the time, but now they're not so appealing (like those books I just got from the library).  Logically, I should delete them and make room for new books.  But - just because I don't want to read them right now doesn't necessarily mean I won't want to read them in the future, right?  Maybe I shouldn't delete them, so I don't forget about them?  I just don't know!  And, my TBR is actually quite small compared to others, so having those extra titles on there for awhile longer isn't hurting anything.

So even though the title of this post is about purging my TBR, in actuality there is very little purging going on.  Perhaps in the future I can be a little more decisive!


Do you ever purge your TBR, or does it just keep getting bigger?  How do you decide what titles to ditch?﻿
Posted by Angela at 7:00 AM