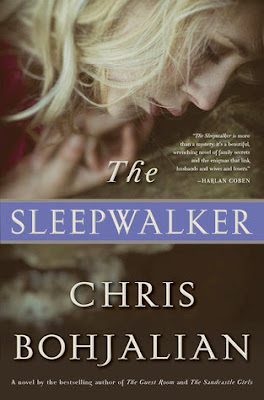 
When Annalee Ahlberg goes missing, her children fear the worst. Annalee is a sleepwalker whose affliction manifests in ways both bizarre and devastating. Once, she merely destroyed the hydrangeas in front of her Vermont home. More terrifying was the night her older daughter, Lianna, pulled her back from the precipice of the Gale River bridge.

The morning of Annalee's disappearance, a search party combs the nearby woods. Annalee's husband, Warren, flies home from a business trip. Lianna is questioned by a young, hazel-eyed detective. And her little sister, Paige, takes to swimming the Gale to look for clues. When the police discover a small swatch of fabric, a nightshirt, ripped and hanging from a tree branch, it seems certain Annalee is dead, but Gavin Rikert, the hazel-eyed detective, continues to call, continues to stop by the Ahlbergs' Victorian home.

As Lianna peels back the layers of mystery surrounding Annalee's disappearance, she finds herself drawn to Gavin, but she must ask herself: Why does the detective know so much about her mother? Why did Annalee leave her bed only when her father was away? And if she really died while sleepwalking, where was the body? - from Goodreads

Hmm, I definitely had mixed feelings about this one.  On one hand, I was intrigued by the sleepwalking aspect and the missing person case, but on the other hand, I was really put off by the main character.

Annalee, wife and mother of two, disappears during the night while her husband is on a business trip, but the case is different from most, since Annalee is a sleepwalker.  There wasn't as much focus on Annalee's disappearance as I would have expected; rather, it was more about her daughter Lianna and how she copes with her mother being gone.

Lianna was not the most interesting of main characters.  She's a bit of a slacker; she smokes a lot of weed; and although I can understand her taking a semester off college to take care of her sister after their mother disappears, sometimes it seems like she was just looking for an excuse to not go back.  However, her relationship with detective Gavin Rikert was the strangest part of this book.  It was totally unethical and inappropriate, in so many ways.

Gavin is assigned to Annalee's case, but it turns out the two knew each other for years.  Both sleepwalkers, they met at the sleep center and then formed their own little support group.  While they didn't have an affair, they did seem very emotionally involved with each other.  Gavin knew a lot about Lianna before they met, which was weird because her mother had never mentioned him before.  He begins to pursue Lianna, despite being older and actively investigating her mother's case.  Lianna is smitten almost instantly and overlooks Gavin's lies and other odd things, saying at one point that she was "incapable" of staying away from him - oh, come on, yes, you can!  Have a little self-respect and willpower!  There was nothing romantic about this relationship to me at all.

I thought the book was readable and the tid-bits about sleepwalking were interesting.  But - the strange relationship between Lianna and Gavin, the over-emphasis on sex, and the glossing over of legal and moral issues at the end of the story didn't sit well with me.