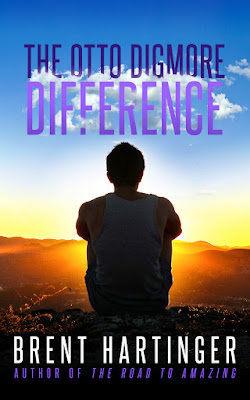 Otto Digmore is a 26-year-old gay guy with dreams of being a successful actor, and he’s finally getting some attention as a result of his supporting role on a struggling sitcom. But he’s also a burn survivor with scars on half his face, and all indications are that he’s just too different to ever find real Hollywood success.

Now he’s up for an amazing new role that could change everything. Problem is, he and his best friend Russel Middlebrook have to drive all the way across the country in order to get to the audition on time.

It’s hard to say which is worse: the fact that so many things go wrong, or that Russel, an aspiring screenwriter, keeps comparing their experiences to some kind of road trip movie.

There’s also the fact that Otto and Russel were once boyfriends, and Otto is starting to realize that he still might have romantic feelings for his best friend.

Just how far will Otto go to get the role, and maybe the guy, of his dreams?- from Goodreads

I received a copy of this book for free from the author in exchange for an honest review.   I also want to thank Lauren from Shooting Stars Mag and Let's Get Beyond Tolerance for bringing this book to my attention.

Otto Digmore is an actor, and when he finds out that an audition for the role of a lifetime is happening across the country, he and his friend Russel take a road trip.  Otto is one of the most self-aware and honest main characters I've ever come across.  He's not afraid to admit that being an actor means he lives a double life, and that in his real life, he is actually very lonely.  Otto also knows how fickle Hollywood can be, for better or worse, and understands how his sexuality and the burn scars that cover him can affect his career.

Otto goes on a road trip with his friend Russel, who was also his first love many years ago.  It's an interesting look at how people can remain friends after a break-up, and how often one person still has feelings for the other, but can't be open about it.  I loved how Russel was there for Otto as a friend, always trying to see the best in every situation, but the supporting characters (other people they meet along the way) really gave the book some depth and heart.  Their stories, however small, really helped break the bubble of Otto and Russel and made the story more well-rounded.

I enjoyed the insider Hollywood secrets, like about how actors make extra money.  The pop culture references were fun, but they could also serve to date the book very quickly.  In a year or two, the book might not feel so fresh.

The writing is readable and accessible, but maybe a bit too conversational in some places.  There were some long monologues, which is kind of a pet peeve of mine, since I don't think people really talk like that in real life.  Also, Hartinger is a bit heavy-handed with the lessons Otto learns during the course of the novel.  I think they could have been handled a bit more subtly, instead of spelling everything out for the reader.