Would You Go "Running Wild" with Bear Grylls?

Bear Grylls - you've heard of this guy, right?  A former soldier in the British Special Forces, Bear Grylls is an expert in wilderness survival.  For many years, he had a television show called Man vs. Wild, which showcased Bear doing some pretty crazy things in the outdoors to teach his audience his trademark survival skills. 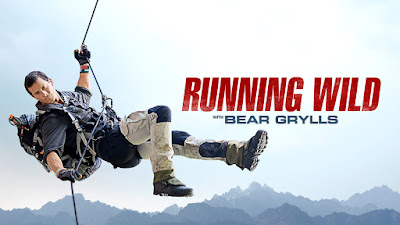 He is currently the host of Running Wild with Bear Grylls, in which he takes celebrities out for a 48-hour adventure in some of the most stunning but sometimes unforgiving places on Earth.  Zac Efron, Channing Tatum, Kate Hudson, and Julianne Hough are just a few of the celebrities that have taken part in the show.  President Obama even appeared on one episode, to discuss climate change in the Alaskan wilderness.  Bear challenges his guests physically, with long hikes, rock-climbing, swimming through frigid waters, and unorthodox sleeping arrangements.  And since this is Bear Grylls, the trip is not complete without having to eat some truly disgusting things - bugs, snakes, even the placenta from a recently born animal.

Tom and I watch every week, and when I ask him if he would ever want to be on the show, his answer is an emphatic NO.  I think my answer would have to be the same!  I did some camping as a teenager, so it's not like I've never slept outside.  But it was always in a tent, with a sleeping bag, and some sort of working bathroom nearby.  And even though Bear makes all the physical stuff look so easy, I doubt I could keep up with him.  I think I lack the upper body strength to do ANY of the climbing featured on the show.  And don't even get me started on the revolting things these celebrities have to eat.  No, no, and no.

However, there is a (very small) part of me that would love to go on an adventure like this.  I mean, if you're going to be in the wilderness, you can't get a better guide than Bear Grylls - he can find the best routes and you know you'll be safe.  Plus, the places he visits with these celebrities are AMAZING: beautiful locations in the United States like the Catskill Mountains and Yosemite National Park and around the world like the Irish Highlands, the South African savannah, and the Italian Alps.  I get wanderlust just watching the show sometimes.  With Bear as the guide, you know he's going off the beaten path and truly getting into some lesser seen areas.  Maybe it's worth eating a bug or two to be able to see some of the most majestic and pristine places on Earth!

So all you outdoorsy adventure-loving folks -  would you want to join Bear Grylls on one of his wilderness quests?  And how many granola bars would you take with you so you wouldn't have to eat whatever Bear finds in the woods?
Posted by Angela at 8:00 AM