Review: Where They Found Her 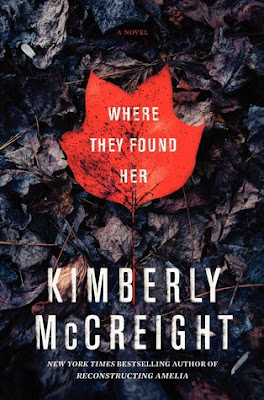 Where They Found Her
Kimberly McCreight
Published April 14, 2015


At the end of a long winter, in bucolic Ridgedale, New Jersey, the body of an infant is discovered in the woods near the town’s prestigious university campus. No one knows who the baby is, or how her body ended up out there. But there is no shortage of opinions.

When freelance journalist, and recent Ridgedale transplant, Molly Anderson is unexpectedly called upon to cover the story for the Ridegdale Reader, it’s a risk, given the severe depression that followed the loss of her own baby. But the bigger threat comes when Molly unearths some of Ridgedale’s darkest secrets, including a string of unreported sexual assaults that goes back twenty years.

Told from the perspectives of Molly, Barbara, and Sandy, Kimberly McCreight’s taut and profoundly moving novel unwinds the tangled truth about the baby’s death revealing that these three women have far more in common than they realized. And that their lives are more intertwined with what happened to the baby than they ever could have imagined. - from Goodreads

Kimberly McCreight's 2013 novel Reconstructing Amelia was one of my favorite reads from last year, so I was excited to read another mystery from her.  While I enjoyed this book, it unfortunately did not live up to the magic of McCreight's first novel.

The story is told from three points of view.  Molly is a reporter at the local paper.  She normally doesn't do hard news, so when she is assigned the story after the body of an infant is found, it presents many challenges, the biggest of which is how she will cope following the loss of her own baby a couple years before.  Barbara is the wife of the police chief and is struggling with her young son's disturbing change in personality.  And Sandy is a high school dropout with an unreliable mother.  One thing readers will quickly learn is that everyone in this small college town is connected, in ways both big and small.  Sometimes the connections seemed a little too convenient and a little too forced.

I think McCreight did a good job in creating three distinct characters.  Although Molly is the main character, Barbara is the most well-drawn.  She is a very involved parent, and she refuses to hear any criticism about her son and his odd behavior.  She's also very tough on her teenage daughter.  She's quick to point out faults in others, such as in the way she seems overly-critical of other mothers.

The main mystery in the book revolves around the body of the infant found near the college campus.  Whose baby is it, and how did it get there?  I would have been satisfied with just this one mystery, but Molly's digging uncovers other secrets involving the local college, and there are also flashbacks to an accidental death involving some of the adult characters when they were in high school.  I sometimes felt like there was too much going on; there were too many concurrent stories, and while they are linked because of the people involved, they didn't necessarily have much to do with each other.  I also felt the resolution to the main mystery of the baby's death was cliché and disappointing.

However, I thought this book was well-written and readable.  The chapters were fairly short, which kept the story moving.  The story wasn't necessarily suspenseful, but there were a lot of twists, turns, and revelations.  I also enjoyed the mixed media approach - like in Reconstructing Amelia, McCreight makes use of more than just the standard narrative, weaving in articles written by Molly, comments on the articles from Ridgedale residents, journal entries, and transcripts from therapy sessions.

3.5 stars: Although it doesn't have quite the suspenseful spark of the author's first novel, I think fans of Reconstructing Amelia will enjoy this story about the secrets of a small town.
Posted by Angela at 8:00 AM