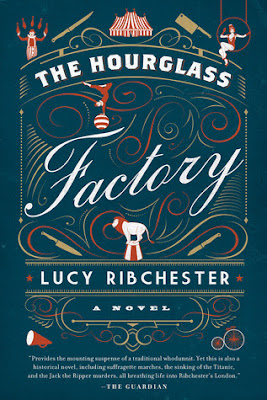 The suffragette movement is reaching a fever pitch, and Inspector Frederick Primrose is hunting a murderer on his beat. Across town, Fleet Street reporter Frances “Frankie” George is chasing an interview with trapeze artist Ebony Diamond. Frankie finds herself fascinated by the tightly-laced acrobat and follows her to a Kensington corset shop that seems to be hiding secrets of its own. When Ebony Diamond mysteriously disappears in the middle of a performance, Frankie and Primrose are both drawn into the shadowy world of a secret society with ties to both London's criminal underworld and its glittering socialites.

How did Ebony vanish, who was she afraid of, and what goes on behind the doors of the mysterious Hourglass Factory? From newsrooms to the drawing rooms of high society, the investigation leads Frankie and Primrose to a murderous villain with a plot more deadly than anyone could have imagined. - from Goodreads

What a strange book!  Two main storylines collide during the novel: Frankie George, a reporter, is searching for a trapeze artist (Ebony Diamond) who vanishes in the middle of a show while Inspector Primrose, assigned to the suffragette beat, is investigating a murder.  Frankie George seemed a bit cliché - she wants to be a journalist but none of the men around her take her seriously; she wears pants; she drinks too much.  I think Inspector Primrose was my favorite character - he just wants to do his job and go home to his wife, but he is hindered by incompetent police officers.  Frankie and Primrose are surrounded by a huge cast of characters, some well-drawn, some not, some with ridiculous names (really, Twinkle?).

The plot suffers from too many ideas.  It's almost as if the author, in trying to establish the historical setting, threw in every reference to the time period she could, among many other ideas as well.  The women's suffrage movement in England, a Jack the Ripper-style murder, a reference to the sinking of the Titanic, plus a trapeze artist, more information about corsets than I ever needed to know, bombs made from a deck of playing cards... Each of these devices certainly made the novel that much more entertaining, but the mystery suffered, becoming too convoluted, and the ending was quite bizarre and unbelievable at times.

It's not that I didn't like the book - I did, or at least I'm pretty sure I did.  Although long (almost 500 pages), the story moves along quickly, and I was interested to see the big reveal that the book was leading up to.  The book was good, but not great.  It kept my interest, although I did find myself skimming certain areas.

3 stars: A quirky, entertaining read that is overly long and complicated in some parts.  I'd recommend this to readers who have an interest in early 20th century London.
Posted by Angela at 8:00 AM