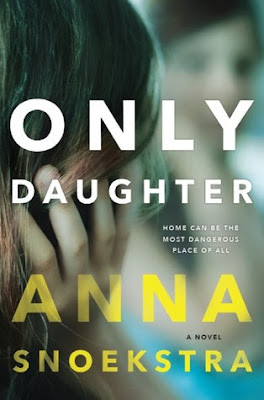 
In 2003, sixteen-year-old Rebecca Winter disappeared.  She'd been enjoying her teenage summer break: working at a fast-food restaurant, crushing on an older boy and shoplifting with her best friend. Mysteriously ominous things began to happen—blood in the bed, periods of blackouts, a feeling of being watched—though Bec remained oblivious of what was to come.

Eleven years later she is replaced.

A young woman, desperate after being arrested, claims to be the decade-missing Bec.  Soon the imposter is living Bec's life. Sleeping in her bed. Hugging her mother and father. Learning her best friends' names. Playing with her twin brothers.

But Bec's welcoming family and enthusiastic friends are not quite as they seem. As the imposter dodges the detective investigating her case, she begins to delve into the life of the real Bec Winter—and soon realizes that whoever took Bec is still at large, and that she is in imminent danger. - from Goodreads

Wow.  Just wow.  This fast-paced psychological thriller really kind of blew me away!

Rebecca Winter was a typical teenager, working a part-time job and enjoying the summer with her best friend, when she disappeared without a trace.  Eleven years later, a young woman uses her resemblance to the missing girl to get out of a shoplifting charge.  She claims to be Rebecca, escaped from her captors.  Initially, Fake Bec (I'm going to call her that, since she never actually gives her real name) plans to leave as soon as she can, but the thought of a warm bed, clean clothes, and food makes her rethink her plan.

Fake Bec is street-smart.  She knows the police will have to test her DNA to make sure she is really Bec.  Her quick thinking gets her out of some tough situations.  Some of the tactics she uses are pretty ingenious - if it had been me, I probably would have done or said something almost immediately to reveal my true self!

The book switches between first-person narrator Fake Bec and flashbacks to the days leading up to the real Bec's disappearance.  There is so much tension in both narratives - strange things are happening to the real Bec in the past, and in the present, Fake Bec is realizing she may be the only person who can find out what really happened to Bec, because someone may be after her, too, who knows her secret.

The book is quite short, which kept the action continuous.  The writing is tight and concise.  I just couldn't stop reading!  The ending completely shocked me - some parts were a little outlandish, but the main premise was not something I had even considered.  It was seriously disturbing!

There were several grammatical errors and typos in the text, which will hopefully get cleaned up before final publication.  In addition, some of the language, particularly in conversations between characters, felt a bit stilted.  But overall, the book was fantastic!

4 stars: Fans of The Girl on the Train will enjoy this intense thriller!
Posted by Angela at 8:00 AM