Review: Before the Fall 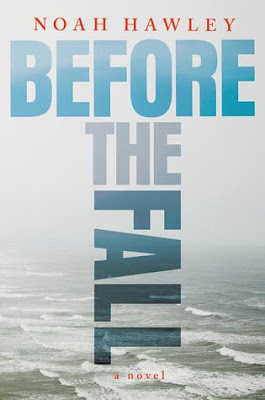 
On a foggy summer night, eleven people—ten privileged, one down-on-his-luck painter—depart Martha's Vineyard on a private jet headed for New York. Sixteen minutes later, the unthinkable happens: the plane plunges into the ocean. The only survivors are Scott Burroughs—the painter—and a four-year-old boy, who is now the last remaining member of an immensely wealthy and powerful media mogul's family.

With chapters weaving between the aftermath of the crash and the backstories of the passengers and crew members—including a Wall Street titan and his wife, a Texan-born party boy just in from London, a young woman questioning her path in life, and a career pilot—the mystery surrounding the tragedy heightens. As the passengers' intrigues unravel, odd coincidences point to a conspiracy. Was it merely by dumb chance that so many influential people perished? Or was something far more sinister at work? Events soon threaten to spiral out of control in an escalating storm of media outrage and accusations. And while Scott struggles to cope with fame that borders on notoriety, the authorities scramble to salvage the truth from the wreckage.

Amid pulse-quickening suspense, the fragile relationship between Scott and the young boy glows at the heart of this stunning novel, raising questions of fate, human nature, and the inextricable ties that bind us together. - from Goodreads

Before the Fall tells the story of a mysterious plane crash over the Atlantic and its aftermath.  What caused the plane to crash?  Foul play? Terrorism? Mechanical failure?  Many of the characters had secrets - David Bateman, the owner of the plane and a media mogul, was facing a potential scandal at his company; the co-pilot was not supposed to be on that flight; passenger Ben Kipling was about to be arrested.  Was someone being targeted?  I think the author does a decent job of laying out several possibilities.

The chapters move back and forth between the present day and flashbacks to the characters' earlier lives and what happened to each on the day leading up the crash.  I can see how the author was trying to establish each character and set up possible motives for the crash, but I didn't really like the flashbacks at all.  Most of the flashbacks were completely unnecessary with details that added nothing to the story.  Sometimes they just felt forced and really out of place; reading about the pilot's unorthodox childhood or how the lead investigator's marriage fell apart 10 years ago, for example, took me out of the story.

A big focus of the book is on the media and how they sensationalize news stories, with really no regard for the truth sometimes.  Bill Cunningham, a news anchor at David Bateman's company, is the worst offender.  He spends hours on-air, postulating wild theories on what might have happened.  He also uses unethical and illegal techniques to get information.  Scott is the target of many of the news stories: who he is, why he was on the plane, his heroic swim to save the young boy.  For someone like Scott, who mostly lives off the grid, it is almost overwhelming to have such attention on him, both good and bad.  I think at times the author was trying too hard to be cerebral about some issues, and it didn't really fit with the tone of the novel.

I don't really want to say too much about the ending and give away the mystery; suffice to say, it was disturbing.

3 stars: A good idea gets bogged down by the details, but I would recommend to fans of mystery novels.
Posted by Angela at 8:00 AM