Review: We Are All Made of Stars 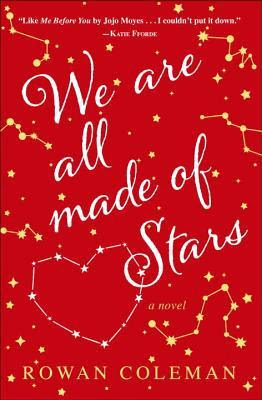 
Stella Carey has good reason to only work nights at the hospice where she is a nurse. Married to a war veteran who has returned from Afghanistan brutally injured, Stella leaves the house each night as Vincent locks himself away, unable to sleep due to Post Traumatic Stress Disorder.

During her nights at the hospice, Stella writes letters for her patients, detailing their final wishes, thoughts and feelings – from how to use a washing machine, to advice on how to be a good parent – and posts them after their death.

That is until Stella writes one letter that she feels compelled to deliver in time, to give her patient one final chance of redemption... - from Goodreads

We Are All Made of Stars is a touching story about the importance of love, family, and forgiveness.

Stella is a hospice nurse who often writes final letters for her patients, to be delivered after they have passed away.  Normally, Stella has no problem keeping this promise, but when new patient Grace asks her to write a letter, Stella is torn about whether or not she should deliver the letter early.  I think this premise is so interesting: Stella faces the moral dilemma of abiding by her patient's last wishes or possibly setting up a final reunion with the son Grace abandoned years ago.  And I wish we had seen more of Stella's struggle!  I felt like a big chunk of the book was missing.  Grace is hardly in the book at all, and Stella only mentions a couple times in passing that she is holding on to a letter that she doesn't know what to do with.  Stella's decision regarding the letter is made rather abruptly, although we do get to experience the full fall-out of that decision.

A bigger part of the story is Stella's marriage to Vincent, a solder who was injured in Afghanistan.  When he returns home, he faces many emotional struggles, including survivor's guilt, and he pushes Stella away.  The conversations between husband and wife were difficult to read: heartbreaking but honest.

There is a concurrent storyline about a young woman named Hope, who is a rehab patient at the hospice.  She has cystic fibrosis, but she will be able to leave the hospice, unlike many of the other patients around her.  Although connected by her friendship with Stella, Hope's story felt a little out of place and unnecessary; I would have preferred more about Grace's story.

One of my favorite parts of the book is the letters from the patients: to husbands, wives, children, siblings, friends, secret loves.  Some were funny, some were serious.  Wives give their husbands practical advice about cleaning the house or when to start dating again; a brother replaces his sister's toy he destroyed when they were children; a woman thanks her friends for their support during her battle with cancer.

The story is quite heavy at times, but there are moments of lightness.  The plot is a little predictable, but I think it works here.

4 stars: Overall, this was a really special story that delicately handled tough subjects like PTSD and death.
Posted by Angela at 8:00 AM