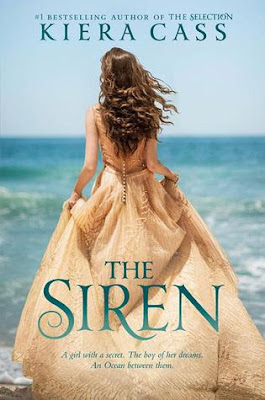 
Years ago, Kahlen was rescued from drowning by the Ocean. To repay her debt, she has served as a Siren ever since, using her voice to lure countless strangers to their deaths. Though a single word from Kahlen can kill, she can’t resist spending her days on land, watching ordinary people and longing for the day when she will be able to speak and laugh and live freely among them again.

Kahlen is resigned to finishing her sentence in solitude…until she meets Akinli. Handsome, caring, and kind, Akinli is everything Kahlen ever dreamed of. And though she can’t talk to him, they soon forge a connection neither of them can deny…and Kahlen doesn’t want to.

Falling in love with a human breaks all the Ocean’s rules, and if the Ocean discovers Kahlen’s feelings, she’ll be forced to leave Akinli for good. But for the first time in a lifetime of following the rules, Kahlen is determined to follow her heart. - from Goodreads

I have mixed feelings about this book. On one hand, I appreciate the mythology and characters, but on the other, I have issues with some of the relationships.

When Kahlen meets Akinli, it is insta-love.  It's a little odd that after just a few hours, she is ready to change her life completely for him.  Of course, her biggest dream in life is to be a bride/wife, but I can almost understand that, as Kahlen was born in the 1920s; I think it is more a product of the culture she was raised in.  However, I was hoping that by experiencing the gamut of the 20th century and seeing how far women have come, especially professionally, she would see her potential to be even more.  A little disappointing!

Another relationship I had issues with was between Kahlen and the Ocean.  It is kind of a mother-daughter relationship; Kahlen loves the Ocean and always wants to make Her proud.  I'm not sure why Kahlen loves the Ocean so much.  Yes, she had a choice to become a Siren, but the Ocean leaves her with only the vaguest memories of her previous life, sentences her to 100 years of luring people to their deaths, and when her time is completed, will spit her out into the world with no memory of what she's been doing for the last 100 years!  Doesn't seem like a very loving relationship.

Despite these issues, there were still some things I enjoyed about the book.  I liked the modern take on the Siren mythology.  I always pictured Sirens as living in the ocean, but these girls live on land when they're not sinking ships.  They sell their artwork online, go to clubs, visit the library - as long as they stay silent, they can interact with other people.  I also liked the deep friendships between the Siren sisters.  They really trusted and loved one another, and they helped each other adapt to their unique lifestyle.