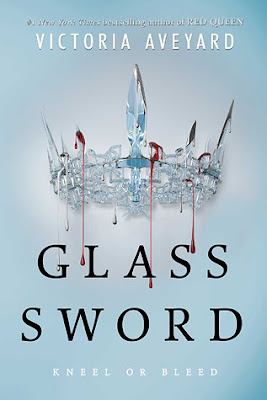 Mare Barrow’s blood is red—the color of common folk—but her Silver ability, the power to control lightning, has turned her into a weapon that the royal court tries to control.

The crown calls her an impossibility, a fake, but as she makes her escape from Maven, the prince—the friend—who betrayed her, Mare uncovers something startling: she is not the only one of her kind.

Pursued by Maven, now a vindictive king, Mare sets out to find and recruit other Red-and-Silver fighters to join in the struggle against her oppressors.  But Mare finds herself on a deadly path, at risk of becoming exactly the kind of monster she is trying to defeat.

Will she shatter under the weight of the lives that are the cost of rebellion? Or have treachery and betrayal hardened her forever? - from Goodreads

After having mixed feelings about Red Queen, I decided to give Glass Sword a try to see if I could get into the series a bit more.  This second installment picks up right where the last book ended.

My biggest issue with this book is Mare - she is such a difficult character for me.  As she makes her way to the Scarlet Guard camp, Mare over-emphasizes her role in the revolution.  I guess because of her time in the palace, Mare is important, but she is not unique.  She is not the only Red with Silver abilities.  Mare just seems so arrogant about her powers, like her life is more important than others - but on the flip side, she complains that she has to hide her powers and seem weak, even faking a limp at one point!  It didn't really make sense because everyone knows who she is.  Is she a weapon, a leader - or is she something to be feared and thus hidden away?  There were mixed messages about her role - does the Scarlet Guard want her or not?  And I got tired of her complaining about being betrayed by Maven.  Yes, it happened and it sucked for all involved, but really, she barely knew him!  If anyone should be angry, it should be Cal!  She says she misses the boy she knew - well, she didn't know the real Maven anyway.  If we could have gotten out of Mare's head for awhile and away from her overly-dramatic thoughts about power and trust, I think the book could have been a lot better.

Mare and her friends break away from the Scarlet Guard to pursue the newbloods - Reds like her with Silver abilities.  At times it was repetitive, especially the constant cat-and-mouse games with Maven, but it was fun to see the new characters and their abilities.  I liked seeing how the new recruits fit into the group and how other people stepped up to help them, like Kilorn and Cal.  I think I enjoyed Cameron the most - probably because she has no problem telling Mare how she really feels about her!

The action picks up in the last 100 pages or so, but there are still major events (re: deaths) that happen off the page.   I also felt like too many things were introduced near the end of the book, like potential allies and a plan to save a legion of teenage soldiers.  It definitely set itself up for the next book, though!

2 stars: I know I'm in the minority here, because this series is super popular, but I just can't get past my issues with Mare and probably won't continue with the next book.  I was also hoping for more world-building, but I didn't feel like it progressed very much.
Posted by Angela at 8:00 AM