Review: The Summer Before the War 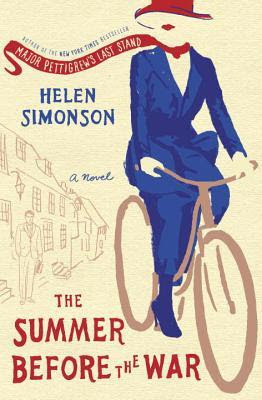 The Summer Before the War


It's the summer of 1914 and life in the sleepy village of Rye, England is about to take an interesting turn. Agatha Kent, a canny force for progress, is expecting an unusual candidate to be the school's Latin teacher: Beatrice Nash, a young woman of good breeding in search of a position after the death of her father. (Never has there been a woman Latin teacher.) Agatha's nephews, meanwhile, have come to spend the summer months, as always, both with dreams of their own: Daniel, the poet, to publish a literary journal in Paris, and Hugh, to graduate from medical studies and marry his surgeon's daughter thus inheriting a lucrative practice. But then Hugh is sent to pick up Beatrice from the train station and life, of course, changes. As with Major Pettigrew's Last Stand, the quintessential English village becomes the stage on which entrenched tradition, class, ignorance, family ties and love play out. Here, these characters and others we come to love and root for become characters we hope and pray for when the shadow of the Great War looms ever closer to home. - from Goodreads

It took awhile for me to get into this book; truthfully, I almost gave up on it several times.  But I'm glad I stuck it out, because the last part of this book is really where it came together.

The book tells a "slice of life" story of various characters living in Rye, England, during the months leading up to and the beginning of World War I.  The book started off very slowly and I wasn't quite sure what the point was.  At first, the biggest event happening in the town is the hiring of a woman to be the school's Latin teacher, and even this takes 100 pages to happen.

When war seems inevitable, we see the upper crust and their long-held beliefs and prejudices take center stage.  It really was quite astonishing to see how the various characters react.  They hold fundraisers, but everything must be just so.  A respected surgeon looks forward to the war so he can pick and choose his cases and further his research.  The surgeon's daughter hands out feathers to men who don't immediately enlist, and she tells potential suitors she will only marry a military man (her motives are questionable, though).  When refugees from Belgium arrive, the townspeople cherry-pick which ones they want to house.

There is a large cast of characters, which sometimes got confusing, but there were a couple standouts.  Agatha Kent is a staple in the community and widely respected, but even she is not immune to local politics.  Beatrice Nash tries way too hard to prove that she is an independent woman; while almost annoying at the beginning, I appreciated her character arc by the end.

The last part of the novel takes place during the war, and we see Daniel and Hugh at the front.  This part saved the book; it felt much more real and had lots more action, but also a lot more emotion.  I admit I teared up quite a few times.

3.5 stars: The meandering plot is saved by the ending.
Posted by Angela at 8:00 AM