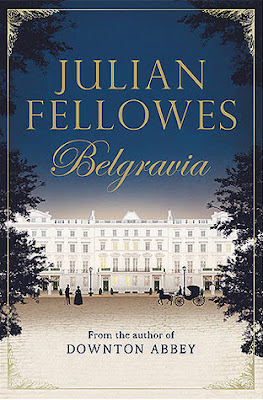 
Julian Fellowes's Belgravia is the story of a secret. A secret that unravels behind the porticoed doors of London's grandest postcode.

At the Duchess of Richmond's new legendary ball, one family's life will change forever. - from Goodreads

Wow, that blurb really tells you nothing about the book, does it?  The story opens in 1815, at the Duchess of Richmond's ball, the night before the Battle of Waterloo.  Sophia Trenchard, daughter of a merchant, is able to secure tickets to the ball through her beau, Edmund, Lord Bellasis.  It's what happens after the ball that sets the rest of the story in motion.  Edmund is killed during the battle, and shortly after, Sophia finds out she is pregnant.  Sophia dies in childbirth and to save the family's reputation, the baby is placed with another family.  After this short introduction, the book fast forwards 25 years.  The illegitimate baby is now a young man (Charles Pope) making his way in the world.  The Trenchards have kept his identity secret for all this time, but when Edmund's mother laments the fact that she and her husband do not have their own heir, Mrs. Trenchard finds herself unable to hide it from her anymore.  The rest of the novel deals with other characters trying to find out who the mysterious Charles Pope is and his connections to the two families.

While there were a couple characters who were likable (Charles Pope, Mrs. Trenchard, and some of the secondary characters), many were just so unpleasant.  Here are just a few examples:
Despite cringing at some of the characters, I did enjoy this book.  It read a bit like a soap opera, with miscommunications, liaisons, and secrets.  Historical fiction is one of my favorite genres, and Julian Fellowes (creator and writer of Downton Abbey, one of my favorite shows) does a great job of delineating the various social classes of the time period, from aristocrats to servants, and how they interact with each other.

3.5 stars: Belgravia doesn't have quite the spark of Downton Abbey, but it's still a dishy summer read!
Posted by Angela at 8:00 AM