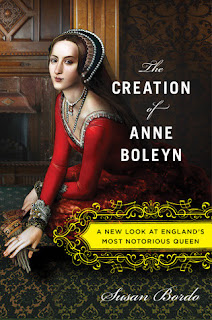 The Creation of Anne Boleyn by Susan Bordo (2013)

In The Creation of Anne Boleyn, Susan Bordo takes a look at both primary sources and more contemporary fictional accounts to reconstruct the life of Anne Boleyn and investigate why we think about her the way we do.

It was interesting to learn how few sources remain from Anne's time, as apparently Henry tried to completely erase all traces of her after the execution.  A lot of what we "know" about Anne comes from letters written by the Spanish ambassador at the time, and as he hated Anne, the source isn't terrible reliable.  I also never realized how many books and movies have been written and made about Anne over the years - I only really know about more recent ones, so that was enlightening.  She has had quite the appeal for a long time!

I felt like the author wasn't the most objective in her writing sometimes - she pretty much bashes both Philippa Gregory and Alison Weir (both favorite Tudor-era historical fiction authors of mine, and also nonfiction for Weir).  And she seemed pretty obsessed with Natalie Dormer's portrayal of Anne in the TV show The Tudors - now, I love that show, but it's not perfect by any means!  Overall, the book was a sometimes intriguing look at the truth and myths surrounding Anne Boleyn.  3 stars 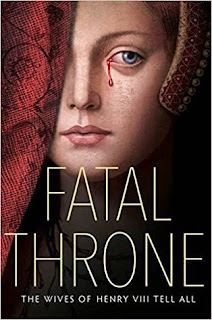 Fatal Throne: The Wives of Henry VIII Tell All by Various Authors (2018)

Seven YA authors tell the story of Henry VIII and his six wives.  I'm a huge Tudor fan, so I'll read pretty much anything related to this era.  When I came across this collection of short stories, I was intrigued! I liked that a different author tackled each wife; it gave them all a unique voice.  I also enjoyed that there was a chapter for Henry after each short story, with his thoughts on each woman or his justification for doing what he did to them.

As someone who has read extensively, both fiction and nonfiction, on these historical figures, this book didn't tell me anything I didn't already know.  Since each story was only about 50 pages, they really just hit the highlights of each wife's time with Henry.  It was definitely geared more towards a YA audience, and while I appreciate that the authors did some research, sometimes it felt like the characters were regurgitating facts directly from the sources.

Anne Boleyn, for me, is the most intriguing of Henry's wives, yet I didn't particularly care for her story in this collection.  She seemed very watered down; kind of a mean girl but also kind of innocent at the same time.  I actually enjoyed the stories about Anne of Cleves, Catherine Howard, and Katheryn Parr the best, as I probably know less about them than the first three wives.  Anne of Cleves' story was particularly interesting, told in flashbacks as she is near the end of her life, visited by the ghosts of her past.  3.5 stars
Posted by Angela at 3:00 AM