Review: When You Read This 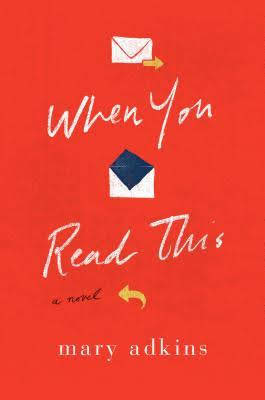 When You Read This
Mary Adkins
Published February 5, 2019


For fans of Maria Semple and Rainbow Rowell, a comedy-drama for the digital age: an epistolary debut novel about the ties that bind and break our hearts.

Iris Massey is gone. But she’s left something behind.

For four years, Iris Massey worked side by side with PR maven Smith Simonyi, helping clients perfect their brands. But Iris has died, taken by terminal illness at only thirty-three. Adrift without his friend and colleague, Smith is surprised to discover that in her last six months, Iris created a blog filled with sharp and often funny musings on the end of a life not quite fulfilled. She also made one final request: for Smith to get her posts published as a book. With the help of his charmingly eager, if overbearingly forthright, new intern Carl, Smith tackles the task of fulfilling Iris’s last wish.

Before he can do so, though, he must get the approval of Iris’ big sister Jade, an haute cuisine chef who’s been knocked sideways by her loss. Each carrying their own baggage, Smith and Jade end up on a collision course with their own unresolved pasts and with each other.

Told in a series of e-mails, blog posts, online therapy submissions, text messages, legal correspondence, home-rental bookings, and other snippets of our virtual lives, When You Read This is a deft, captivating romantic comedy—funny, tragic, surprising, and bittersweet—that candidly reveals how we find new beginnings after loss. - from Goodreads

This book wasn't what I expected, and it bummed me out! I've read and enjoyed books before that feature characters suffering from terminal illnesses (and they can be quite uplifting, ironically), but unfortunately, When You Read This was full of unlikable characters and a depressing tone.  The blurb states it's a romantic comedy, but I got neither of those things.

Smith, Iris' colleague, and Jade, Iris' sister, are the two major players in the story.  After Smith's intern, Carl, finds a print-out of Iris' blog in her old desk with a note asking Smith to get it published after her death, Smith begins reaching out to different publishing avenues while also trying to get Jade on board.  Smith seems like a nice guy, I guess, but he's also got some major personal issues and can be quite unethical in his professional life.  Jade came across cold, rude, and hypocritical - she randomly decides to honor Iris' dream of opening a bakery, something she never even knew Iris wanted until after she died, yet she is so against publishing the blog entries, which Iris expressly stated her desire for.  I thought the "romance" (and I put this in quotes because it hardly came through) between Smith and Jade felt forced, and there were more sparks between Iris and the man she was dating just before she passed away.

At the risk of sounding callous, I also didn't really understand Iris' motivation in wanting to get the blog published.  I appreciate that she wanted to express herself, but to me the posts were kind of confusing/didn't have a clear message/didn't say anything profound.  I don't know, maybe I just didn't get it, but I don't feel like I got to know Iris that well.

There were a couple things I liked.  I enjoyed the epistolary nature of the story - the blog posts, emails, texts.  It's a very modern and creative way of telling a story.  It lets different avenues inform us about the characters, but at the same time, it can feel too surface-y.  Even though I hated Carl the intern, he was also the only character that made me almost laugh, simply because he was so obnoxious and unprofessional. The book was also a super-quick read; I flew through it in just a few hours on a rainy Sunday.  Overall, though, I just didn't feel good reading this book.