A novella retelling of Agatha Christie's And Then There Were None, set aboard a spaceship headed for a distant planet.

Blair, an engineer, is one of 4000 people cryogenically frozen on a ship hurtling through space.  He along with nine other people are awoken when the ship detects something that needs their attention.  When they find a person who has clearly been murdered, they all soon realize that one of them must have done it.

It's bad enough that the ship is partially crippled, but now these crew members have to figure out who the murderer is among them.  The story is quite short and moves at a fast pace, so there wasn't a ton of time for any character development or even build-up of the mystery.  It was really more process of elimination as more people are killed, so that was a little disappointing.  I wish the story had been more fleshed out, but I did enjoy the straightforward writing and the space setting, and the reasoning behind the murders was pretty unexpected.  4 stars 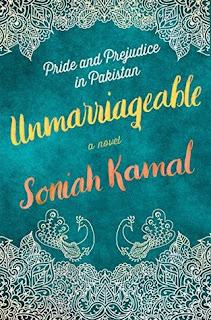 A retelling of Jane Austen's Pride & Prejudice set in modern-day Pakistan.  Alys is one of five sisters that her mother can't wait to see married off.  When she meets Valentine Darsee at a wedding, sparks fly - but not in a good way.  However, as she gets to know him, Alys realizes there might be more to Darsee than she originally thought.

I love P&P retellings, and this was a good one.  The idea of a mother wanting to find wealthy husbands for her daughters translated well to the modern setting.  I loved Alys' headstrong and independent nature; as a teacher, she is constantly impressing upon her students that they can have dreams besides only becoming a wife and mother.  She herself doesn't think she will ever get married.  At times, she could be a little too sanctimonious, particularly when disciplining her sisters.  Her mother was wonderfully overbearing and her father had the heart and dry sense of humor of the original Mr. Bennet (my favorite character from the classic story).  Kamal did a beautiful job of bringing the setting of Pakistan to life - the culture, religion, clothing, FOOD.  It was totally immersive.  My only quibble with the book was that it sometimes felt too close to the original, like just the names were changed.  I wish Kamal had been a little more creative with the retelling.  4 stars
Posted by Angela at 3:00 AM