The Weasleys: A Truly Magical Family 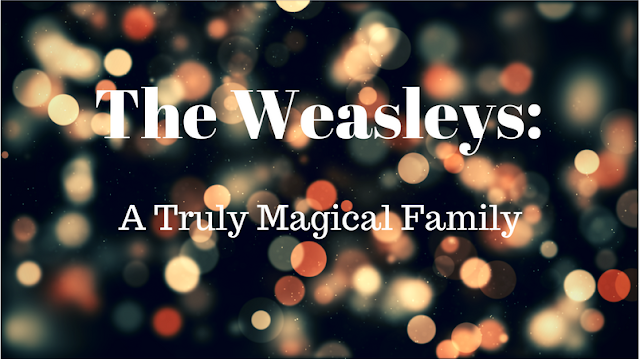 For some reason, I always think of Harry Potter in the fall.  I don't know if it's all the wizards, witches, and magic that remind me of Halloween or what, but I was inspired to write a post about one of my favorite magical families, the Weasleys!  There are so many reasons to love this wizarding family...

Their willingness to forgive
Unlike some other wizarding families, who cast out and shun family members who don't agree with them, the Weasleys value all their members.  When Percy distances himself, refusing to believe that Voldemort has returned, the Weasleys don't cut him off.  They still love him and worry about him.  And when he realizes he was wrong, they welcome him back, and he helps the family in the Battle of Hogwarts.


They would do anything for each other
The best example of this is Molly Weasley killing Bellatrix Lestrange after she tried to hurt Ginny.  But it also extends to honorary family members Harry and Hermione.  Ron sticks up for Hermione against Draco Malfoy, and the family is an integral part of moving Harry from the Dursley home to the Burrow on his 17th birthday, despite the serious danger they were all put in.


They don't discriminate
Being a pureblood family means a lot in the wizarding world, but the Weasleys don't tout this status.  They treat everyone with the same respect, as long as they deserve it.  They fully embrace Muggle-born Hermione, inviting her to stay at their home and celebrating her achievements (and of course, we know she marries Ron!).  Arthur Weasley is actually fascinated by Muggles, their devices, and how they manage without magic.  Even when it comes to Harry Potter, they're still down-to-earth.  Although at first they are a bit stunned by his "celebrity" status, they soon treat him like just another member of the family.


Their gifts are always from the heart
It's no secret that the large Weasley family doesn't have a lot of money; in fact, they're often mocked for it.  But that doesn't stop Mrs. Weasley from giving her kids Christmas gifts each year.  Her thoughtful gifts of mince pies, candy, and personalized sweaters show that one can be thrifty yet still give meaningful gifts.  And I love that they always include Harry, who never really got Christmas gifts before he met them.  Even if there weren't gifts, the Weasley household never lacks in love and cheer.


They're just like us, in a lot of ways
What makes the Weasley family so special to me is that J.K. Rowling has created a family that is still normal, despite the fact that they can do some pretty serious magic.  Molly Weasley is the harried wife and mother, taking care of everyone.  The siblings taunt each other (and their mother).  The twins are rebellious jokesters.  They're a real family, with highs and lows just like anyone else.


I know I'm not the only one who loves this family, so what are some of your favorite things about the Weasley family?
﻿
Posted by Angela at 5:00 AM