Review: The It Girls 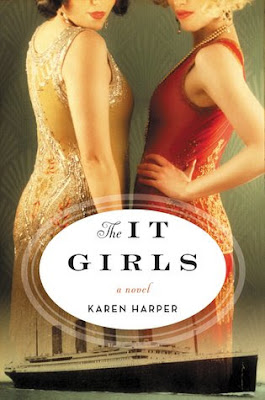 One sailed the Titanic and started a fashion empire . . .

The other overtook Hollywood and scandalized the world . . .

Together, they were unstoppable.

They rose from genteel poverty, two beautiful sisters, ambitious, witty, seductive. Elinor and Lucy Sutherland are at once each other’s fiercest supporters and most vicious critics.

Lucy transformed herself into Lucile, the daring fashion designer who revolutionized the industry with her flirtatious gowns and brazen self-promotion. And when she married Sir Cosmo Duff-Gordon her life seemed to be a fairy tale. But success came at many costs—to her marriage and to her children . . . and then came the fateful night of April 14, 1912 and the scandal that followed.

Elinor’s novels titillate readers, and it’s even asked in polite drawing rooms if you would like to “sin with Elinor Glyn?” Her work pushes the boundaries of what’s acceptable; her foray into the glittering new world of Hollywood turns her into a world-wide phenomenon. But although she writes of passion, the true love she longs for eludes her.

But despite quarrels and misunderstandings, distance and destiny, there is no bond stronger than that of the two sisters—confidants, friends, rivals and the two “It Girls” of their day.- from Goodreads

The It Girls tells the story of sisters Elinor Glyn, a boundary-pushing writer, and Lucille Duff-Gordon, a fashion pioneer, from their days as young girls on the brink of poverty through the success of their later years.  I expected a good historical fiction story, but the book lost me along the way.

The sisters are at the heart of this book, and their relationship was not an easy one.  At times, they were totally supportive of each other and stood up for one another through scandals; other times they were jealous of each other and argumentative, sometimes not seeing each other for years at a time.  I wanted a bit more interaction between Elinor and Lucille, but they each lead such interesting lives on their own that I could almost forgive this.  The biggest thing I knew about Lucille Duff-Gordon before reading this book was the scandal that erupted after the sinking of the Titanic, in which she and her husband were accused of bribing ship employees to not take more survivors onto their lifeboat, but I learned that both she and Elinor had many personal and professional successes and failures.

The writing is good, not great, but it's the dialogue that really hampered my reading experience.  It's cringe-worthy at times: totally too descriptive and too much telling rather than showing.  It's just not how real people talk; I think at times the author was using dialogue to fill the reader in on what happened during time gaps or to give more information, but it was hard to read.

The book covers several decades, so I expected that not everything could be covered in great detail.  However, sometimes several years pass with no warning.  For example, Lucille's daughter goes from a newborn to 7 years old in one turn of the page.  At the same time, I often felt that there was too much information.  It's obvious that Harper did extensive research on the sisters, but the inclusion of several random anecdotes made me wish she had been more discerning about what she chose to feature in the book.  These anecdotes didn't move the story forward in any way and weren't connected to anything else; they could have been left out without any effect on the story.