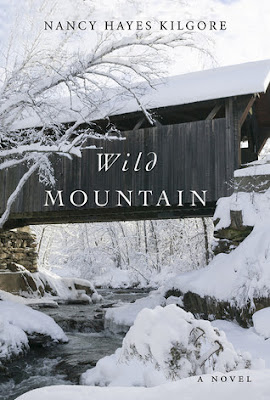 
Vermonter Mona Duval loves the covered bridge beside her store. She loves local history and the rugged, rural nature of her home state. But when an ice storm collapses the bridge, she is bereft. Frank MacFarland, a seasonal resident who is beguiled by Mona, lends his political expertise to help rebuild the bridge. But they meet with powerful opposition. Tensions arise in the town, compounded by resistance to the soon-to-be-voted on Freedom to Marry bill. And then, unexpectedly, Mona's abusive ex-husband arrives. Wild Mountain is a page-turning, beautifully written novel about the love between Frank and Mona, the love of place, freedom to marry, and freedom from the past, by a writer whose prose has been compared to Alice Munro’s. - from Goodreads

I received an ARC from the author's publicist in exchange for an honest review.

Wild Mountain is a slice-of-life look at a small town in Vermont in 2008.  The residents of the town are faced with both the collapse of a historic bridge and an upcoming vote on the Freedom to Marry bill, and these two issues bring out both the best and worst in the locals.

There are a lot of characters packed into this book, but the author was able to develop different personalities to represent the many sides of the local political scene.  Some of the characters had quite extreme views that I didn't always agree with; it was difficult at times to read their hateful words.

I enjoyed getting to know the main character, Mona.  She's a local woman with a deep love for her town; she's a bit of a historian (which I can relate to) and an expert on the covered bridge.  The loss of the bridge felt so personal to her; not only was it a relic of an earlier era, but it was also a physical connection between the two sides of town, meaning her general store suffered a bit because customers could no longer easily reach it.  Although I didn't always feel that Frank was the best match for her (I wasn't convinced he could give up his jet-setting lifestyle for small-town living), it was nice to see Mona grow and learn to trust someone in regards to her love life.

At times, it felt like there were too many storylines going on.  I thought the book was mainly going to be about the collapse of the historic bridge and the fight to recreate the bridge or find a cheaper alternative, but there seemed to be more about the Freedom to Marry bill than the bridge.  There was also a side story about Mona's ex-husband coming around town again and yet another about a hermit, Gus, who lives on the mountain.  With so many things going on, I felt the side stories suffered; some were left unresolved while others were quietly and sometimes too conveniently wrapped up.  If the bigger issues had been fleshed out further and the side stories left out completely, I think the entire story would have felt more cohesive.

However, the author did a great job in setting the scene.  As I was reading, I could picture this small town, the covered bridge, and the surrounding mountains.  It made me want to take a trip to Vermont!