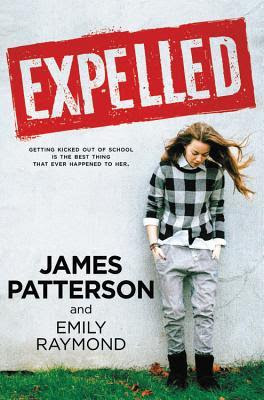 Will Foster's Twitter account used to be anonymous--until someone posted The Photo that got him and three other students expelled, their futures ruined forever. But who took the picture, and why are they being targeted?

To uncover the truth, Will gets close to the suspects: the hacker, the quarterback, the bad girl, the class clown, the vice principal, and...his own best friend. What secrets are they hiding, and even worse--what do they know about each other? The terrible truth will haunt them forever.

New York Times bestselling author James Patterson brings us another fast-moving tale of suspense, with danger, romance, and twists and turns that will keep you guessing to the very last page. - from Goodreads

I received an ARC of this book for free through Goodreads Giveaways.

It's books like this that make me glad I'm not in high school anymore!  I didn't even go to high school that long ago, but we didn't have all these social media issues like the ones in Expelled.  A crude photo of some students is posted on Theo's (it says the MC's name is Will in the blurb, but in my ARC, it's Theo) Twitter account, and because of the school's zero tolerance policy, Theo and the identified students in the picture are all expelled.  But Theo knows he's innocent, and he wants to prove it.

Patterson and Raymond have created a group of students that may seem at first glance like typical high school cliches, but they become much more than that as the book goes on.  Theo is kind of an average kid - he gets decent grades and he sometimes writes for the school paper, but he's dealing with a lot in his home life.  His best friend Jude is an artist, Parker is a jock with a huge secret, and Sasha is a tough girl.  I thought the authors did a great job in creating these distinct characters and actually making them realistic - they act and talk like real teenagers (although Sasha can get a bit pretentious at times).

Theo has the idea to prove his innocence by making a film, questioning his "suspects" and others in order to find out what really happened and why the picture was uploaded to his Twitter feed.  I guess he wanted proof on camera, but this plot device didn't work so well for me.

In any event, what Theo discovers in his investigation was actually not what I was expecting.  I appreciated that the authors tied in bigger issues and questions about doing what is right versus doing what is popular.  However, the book dragged on a bit after this revelation, and one big bombshell right at the end of the book was completely unnecessary, in my opinion.  In a book with a lot of heavy topics, that one felt like overkill.  Overall, though, I thought this was a quick-moving, well-written story.