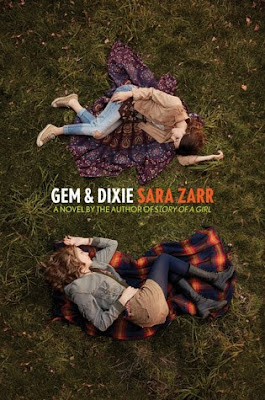 
Gem has never known what it is to have security. She’s never known an adult she can truly rely on. But the one constant in her life has been Dixie. Gem grew up taking care of her sister when no one else could: not their mother, whose issues make it hard for her to keep food on the table, and definitely not their father, whose intermittent presence is the only thing worse than his frequent absence. Even as Gem and Dixie have grown apart, they’ve always had each other.

When their dad returns home for the first time in years and tries to insert himself back into their lives, Gem finds herself with an unexpected opportunity: three days with Dixie—on their own in Seattle and beyond. But this short trip soon becomes something more, as Gem discovers that that to save herself, she may have to sever the one bond she’s tried so hard to keep. - from Goodreads

This book just about broke my heart, so many times.  When the story opens up with 17-year-old Gem not sure where she's going to get her next meal from, you know things are going to be rough.

Gem and her younger sister Dixie haven't had an easy life.  Their father hasn't been around for most of it.  Their mother doesn't have steady employment and often does drugs.  Gem was more like a mother to Dixie, but by the time we meet them, Dixie has grown up, way too fast, and now seems more like the older sister (she has a fake ID and a tattoo and buys pills for her mom at school).

The sisters' dad comes back to town and when they find the bag of (probably illegally obtained) money he hides in their room, Gem decides she needs a break, so she and Dixie run away for a couple days.

I felt so bad for Gem.  A teenager shouldn't be the most responsible person in her family.  Her parents' poor choices and behavior have really taken their toll on her.  She often feels lost and lonely, yet she dreams of being on her own someday, away from her family.  Dixie, however, doesn't want to leave their parents, no matter how neglectful they are.  She still believes in them and wants to give them another chance.  The three days Gem & Dixie spend together are a pretty good reflection of their relationship.  Even though they don't always get along, there are moments of closeness and honest conversation between them.

The story was a very quick and easy read, but it didn't end in the way I expected or wanted it to.  Suddenly everything was happening way too quickly, and I'm still not sure how I feel about where the sisters ended up.  Also, at times it was hard for me to believe Gem was 17 years old; there was just something about the character that kept making me think she was much younger.