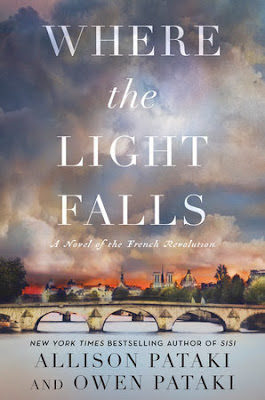 
From the courtrooms to the battlefields to the alleyways of Paris, with cameos from infamous figures in French history, the Patakis have crafted an epic, action-packed novel of the French Revolution as it has never been seen before. Three years after the storming of the Bastille, Paris is enlivened with the ideals of liberty, equality, and fraternity. The monarchy has been dismantled and a new nation, for the people, is rising up in its place. Jean-Luc, a young optimistic lawyer, moves his wife, Marie, and their son to Paris, inspired by a sense of duty to contribute to the new order. André, the son of a former nobleman, flees his privileged past to fight in the unified French Army with his roguish brother. Sophie, a beautiful young aristocratic widow and niece of a powerful, vindictive uncle, embarks on her own fight for independence.

Underneath the glimmer of hope and freedom, chaos threatens to undo all the progress of the revolution and the lives of these compatriots become inextricably linked. As the demand for justice breeds instability, creates enemies out of compatriots, and fuels a constant thirst for blood in the streets, Jean-Luc, Andre, and Sophie are forced to question the sacrifices made for the revolution. Liberty proves a fragile, fleeting ideal, and survival seems less and less likely—both for these unforgettable individuals, and indeed for the new nation itself. - from Goodreads

I'll read anything Paris-related and the focus on the French Revolution is a really interesting time period!
Posted by Angela at 5:00 AM