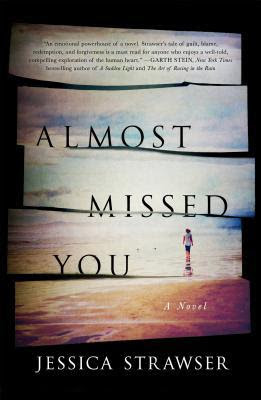 
Violet and Finn were “meant to be,” said everyone, always. They ended up together by the hands of fate aligning things just so. Three years into their marriage, they have a wonderful little boy, and as the three of them embark on their first vacation as a family, Violet can’t help thinking that she can’t believe her luck. Life is good.

So no one is more surprised than she when Finn leaves her at the beach—just packs up the hotel room and disappears. And takes their son with him. Violet is suddenly in her own worst nightmare, and faced with the knowledge that the man she’s shared her life with, she never really knew at all.

Caitlin and Finn have been best friends since way back when, but when Finn shows up on Caitlin’s doorstep with the son he’s wanted for kidnapping, demands that she hide them from the authorities, and threatens to reveal a secret that could destroy her own family if she doesn’t, Caitlin faces an impossible choice.

Told through alternating viewpoints of Violet, Finn and Caitlin, Almost Missed You is a powerful story of a mother’s love, a husband’s betrayal, connections that maybe should have been missed, secrets that perhaps shouldn’t have been kept, and spaces between what’s meant to be and what might have been. - from Goodreads

So a lot of other reviews characterize this book as suspenseful or a thriller - maybe it's just me, but I didn't get that impression at all.  I found this book to be way more character-driven than I expected.

Violet is stunned when her husband Finn suddenly disappears while on vacation, taking their son Bear with him.  Finn goes to long-time friend Caitlin and demands her help. After the initial shock of Finn taking Bear, the story then delves into flashbacks of how Finn, Violet, and Caitlin got to this point in their lives, revealing many secrets held by the characters, and how they try to resolve the situation.

Finn was a complicated character.  He was at times selfish, cowardly, remorseful, cold, and threatening; his emotions swayed so quickly from one end of the spectrum to the other.  As the story of why Finn ran is revealed, I could kind of sympathize with him, but at the same time, he definitely handled the situation in practically the worst way possible, and a lot of things would have been different if he had just talked to his wife a long time ago.  Caitlin was also an interesting character - she had to balance her loyalty to Finn and Violet with the possibility that her biggest secret would be revealed to her husband.  Should she turn Finn in?  Should she tell Violet she knows where her beloved son is?  Is all of this worth the potential loss of her own family?

The story brought up a lot of uncomfortable questions about marriage, secrets, and friendship.  Just some of the issues discussed include how well we really know our spouses; why people keep secrets, especially from those they love and who would be affected the most by them; if friends are obligated to share secrets; and seeing what we want to see (like when Violet's grandmother admits to her that Finn appeared to be unhappy and "checked out" for awhile and Violet is shocked because she never noticed).  This story is definitely an extreme lesson in what happens when people are not honest with each other and themselves.