For this installment, I've chosen short stories - or rather, short stories chose me.  I was browsing the new release shelves at my library and Jojo Moyes' distinctive font caught my eye.  At first I was a little reluctant to check out Paris for One and Other Stories (2016), but since I loved Me Before You so much, I decided to give it a try. 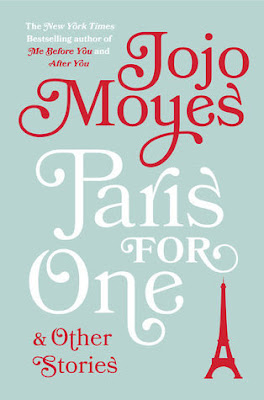 From the #1 "New York Times" bestselling author of "Me Before You" and "After You," a sensational collection featuring the title novella and eight other stories. Quintessential Jojo Moyes, "Paris for One and Other Stories" is an irresistibly romantic collection filled with humor and heart.

Nell is twenty-six and has never been to Paris. She's never even been on a romantic weekend away to anywhere before. Everyone knows travelling abroad isn't really her thing. But when Nell's boyfriend fails to show up for their romantic mini-vacation, she has the opportunity to prove everyone including herself wrong. Alone and in Paris, Nell uncovers a version of herself she never knew existed: independent and intrepid. Could this turn out to be the most adventurous weekend of her life? Funny, charming, and irresistible, "Paris for One"is vintage Moyes as are the other stories that round out the collection. - from Goodreads

I think there must be a real art to writing short stories - being able to create characters and a story arc in just a few pages, adding just enough detail so the reader understands what's going on without inundating them.  I think Moyes was successful here in that each short story (and one novella) felt mostly complete; I was able to get a clear sense of the characters and what was happening in each story, without the benefit of many pages and chapters of background.  Some of them had twist endings, which helped.

The novella is a cute story about a woman stood up by her boyfriend who makes the most of a weekend in Paris; it's quite romantic and hopeful, but almost a bit too sweet.  However, some of the stories were just strange - particularly the ones about a robbery at a jewelry store and a woman finding someone else's cell phone.  There wasn't anything particularly special about most of them.  They are all told from a female point of view, and many feature an unhappy woman who is taking control of her life.  The writing was good, but not great.

My issue with short stories is that I just want more - I know I said the stories here felt mostly complete, but in a lot of the cases, I wanted more detail.  The stories could be fleshed out, particularly the stories about long marriages.  I wanted to know how the characters got to these places in their lives instead of being dropped in, in the middle of the story.  It's hard to feel connected or invested when you only get a few pages.
Posted by Angela at 7:00 AM

Email ThisBlogThis!Share to TwitterShare to FacebookShare to Pinterest
Labels: short stories, Try it