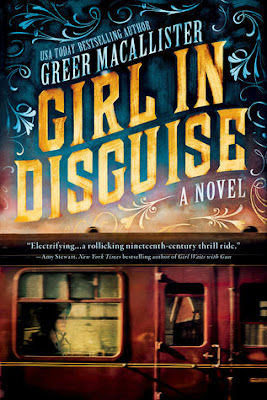 
For the first female Pinkerton detective, respect is hard to come by. Danger, however, is not.

In the tumultuous years of the Civil War, the streets of Chicago offer a woman mostly danger and ruin-unless that woman is Kate Warne, the first female Pinkerton detective and a desperate widow with a knack for manipulation.

Descending into undercover operations, Kate is able to infiltrate the seedy side of the city in ways her fellow detectives can't. She's a seductress, an exotic foreign medium, or a rich train passenger, all depending on the day and the robber, thief, or murderer she's been assigned to nab.

Inspired by the real story of Kate Warne, this spirited novel follows the detective's rise during one of the nation's greatest times of crisis, bringing to life a fiercely independent woman whose forgotten triumphs helped sway the fate of the country. - from Goodreads

Girl in Disguise is based on real-life Pinkerton detective Kate Warne, the first woman to hold such a position.  Kate makes for such an interesting main character - a widow without a knack for "typical" women's work, she convinces Allan Pinkerton to hire her as a detective.

The first half of the book felt a bit scattered and choppy; it jumped from one situation to another as Kate takes on different cases.  I was worried that the whole book would be like this; the lack of cohesiveness took away from the story a bit.  However, halfway through the book, my fears were eased as the story settled into one main storyline, when President Lincoln accepts the help of the Pinkerton detectives as spies during the Civil War.  Kate goes undercover with a fellow detective as a married couple to gather intelligence.

It was hard to read about Kate not being accepted by her fellow detectives, who believed she wasn't capable of doing the work or was only there to find a husband, or, even worse, was having an affair with the boss.  Unfortunately, that was so typical of the time, and in this way the author really captured the feel of the era.

Besides the lack of cohesion during the first half of the book, my one major quibble is actually the title.  I feel like calling Kate the "girl" in disguise takes away a bit from her story and is somewhat demeaning, making her seem more like a little kid playing dress-up than the strong, intelligent, resourceful woman she was.  Throughout the course of the novel, she proves herself time and again to her co-workers and becomes indispensable to the Pinkerton Agency, paving the way for more female detectives.  Title aside, Girl in Disguise is a well-written, thrilling, and even emotional tale of a woman ahead of her time.