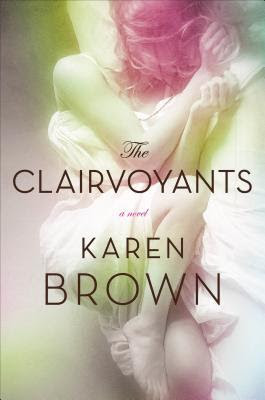 
On the family homestead by the sea where she grew up, Martha Mary saw ghosts. As a young woman, she hopes to distance herself from those spirits by escaping to an inland college town. There, she is absorbed by a budding romance, relieved by separation from an unstable sister, and disinterested in the flyers seeking information about a young woman who’s disappeared—until one Indian summer afternoon when the missing woman appears beneath Martha’s apartment window, wearing a down coat, her hair coated with ice. - from Goodreads

Martha can see ghosts.  When she decides to go away to college, she's hoping she can leave all that behind, but on the first day in her new home, she sees the ghost of a missing local woman (Mary Rae) and she becomes way more involved than she ever wanted to be.

Martha ends up meeting Mary Rae's friends and starts dating William, who also used to date Mary Rae.  Martha and William get married just months after meeting, but from the start, their relationship has major problems.  Martha's sister Del also plays a large role in the story.  Close as kids, Del and Martha drifted apart when Del was committed to an institution, but she checks herself out and moves in with Martha.  The two share a complicated history that includes the death of a local boy when they were teenagers, and I sometimes wondered if Del shared her sister's gift and just couldn't handle it.

The supernatural elements are atmospheric, never cheesy.  The story is more about Martha's reluctance to use her gift, so we only get snippets of it.  This isn't a fantasy novel; the mystical features felt very real to me, like this could actually be how mediums and clairvoyants experience things (I think it helped that I'm a believer!).

I really enjoyed the writing in this book.  I'll just say it - it was haunting.  Martha is a bit of an unreliable narrator, but not in the normal way.  She's very indecisive, constantly changing her mind about things she believes to be true (like, are Del and William having an affair, or not?).  Her observations made me question everyone and everything right alongside her.  At the same time, the general direction of the story was pretty obvious, particularly when the author includes some "hindsight is 20/20" observations from Martha.  Almost right from the start, we know there are things about William that are just off.  However, even though I could kind of guess the outcome of the mystery of Mary Rae's death, the route it took to get there was not something I saw coming.  There's more to the mystery than there appears to be.  Everyone here has secrets, including Martha.