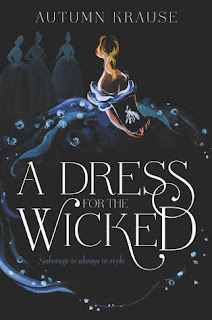 Country girl Emmy is chosen to participate in a design competition in the big city, but nothing turns out like she hoped or planned.

I was interested in this novel because it was described as Project Runway meets historical fiction, and I thought that was a fun combination.  While there were things I enjoyed about the book, a lot of it was a disappointment.  First, the world-building was almost non-existent.  If I hadn't known going in that the story took place in a kind of alt-universe Victorian London, I would never have guessed it.  The dialogue felt very modern, and there wasn't a whole lot of description of the outside world.  It was unclear why if fashion was such a huge part of the economy of the country, there was only one major fashion house (helpfully called Fashion House), other than that was what the "monarchy" wanted.  It's hard to describe - everything felt very generalized, like the story had broad ideas that were never fully nailed down or given much detail in later editing.  There were at least 3 secondary stories that either went nowhere or were dealt with in literally one sentence.

I did like Emmy, though.  It's hard not to feel for her when this competition is her one chance to get out of her small town, yet she's being sabotaged at every turn.  It's obvious that no one takes her seriously, even though she has talent and ambition.  3 stars 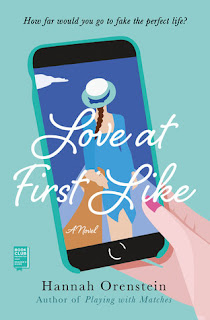 Eliza runs a jewelry store and finds her business booming after she accidentally posts a photo of herself wearing an engagement ring, although she doesn't even have a boyfriend.  When her store is threatened by rising rents, she decides to run with the false story and find herself a fake fiance.

I liked several of the themes of the story, but it ultimately left a bad taste in my mouth.  There's some good stuff here regarding social media influencers, honesty, and staging photos.  I also liked the tidbits we got about Eliza as a business owner; her company is her dream, her life, and she would do anything to save it.  However, how far is too far?  I could get on board with Eliza finding a fake fiance who was also in on the "scam," but she begins dating a guy Blake, who has a lot of potential, and then manipulates him and the relationship into what she needs.  She fast tracks the romance, even though she admits several times that if the circumstances were different, she'd take way more time to develop the relationship or even dump him; she doesn't feel a huge spark with him, but could maybe learn to love him.  I felt so bad for Blake, who seems head over heels for Eliza, since he had no idea what was going on and how she was lying to him.  I didn't like the way she purposefully sought out press and sponsored partners, committing to a wedding before she even had a boyfriend.  I know she was doing it to help her business, but she put herself (and those around her) in this awful predicament.  Minor spoiler alert - you know a story like this is going to have a happy ending, which makes it all the more infuriating, because it's showing that even though you can do terrible things to other people, lie and cheat and steal, you may very well still end up winning in the end.  For people like Eliza, there are no consequences for her actions.  3 stars
Posted by Angela at 3:00 AM