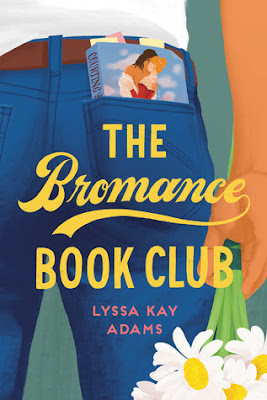 
The first rule of book club:
You don't talk about book club.

Nashville Legends second baseman Gavin Scott's marriage is in major league trouble. He’s recently discovered a humiliating secret: his wife Thea has always faked the Big O. When he loses his cool at the revelation, it’s the final straw on their already strained relationship. Thea asks for a divorce, and Gavin realizes he’s let his pride and fear get the better of him.

Welcome to the Bromance Book Club.

Distraught and desperate, Gavin finds help from an unlikely source: a secret romance book club made up of Nashville's top alpha men. With the help of their current read, a steamy Regency titled Courting the Countess, the guys coach Gavin on saving his marriage. But it'll take a lot more than flowery words and grand gestures for this hapless Romeo to find his inner hero and win back the trust of his wife. - from Goodreads

The premise of this book is genius, isn't it?  A man trying to win back his wife and avoid divorce gets help from his buddies, who run a secret book club for men only where they read romance books to get relationship tips.  I had high hopes going into this one and it did not disappoint!

Thea and Gavin have been married for three years, but things aren't always easy - Gavin's career as a professional baseball player means he's gone a lot, leaving Thea to manage their children and home alone.  She is increasingly frustrated with their life, and the fight they have after Gavin finds out she's been faking orgasms for their entire relationship is the last straw for her.  Gavin, however, doesn't want to lose his family, and his friends help him come up with an unorthodox solution to rebuild his marriage.

First off, I just have to say that this book was way funnier than I thought it would be - yes, it has some tough subjects and emotional conversations, but the interactions between Gavin and the other members of the book club are just hilarious.  I actually laughed out loud a couple times, which I pretty much never do when reading.

I loved Gavin because he seemed like such a real guy - he wants to win his wife back and he's willing to put in the work to do it, but he still gets frustrated and lashes out sometimes without thinking.  I could feel his sincerity, though, even when he was using lessons learned from the romance book.  He knows what he feels, he just needed a little help in showing it.  I thought the excerpts from the romance book were a nice touch, and they showed how the guys in the club used them to learn how to really listen to women and express themselves.

For a lot of the book, I was really frustrated by Thea - I wanted her to admit that maybe she had caused some of their problems, too, by lying to Gavin for so long.  I think if she had spoken up about how unfulfilled she felt in several areas of her life, they would have been better off.  She was a really well-rounded character, though, with a full backstory, and by the end of the book, she experienced a lot of growth.  Overall, this book was a winner - it had humor, heart, and some seriously steamy sex scenes!