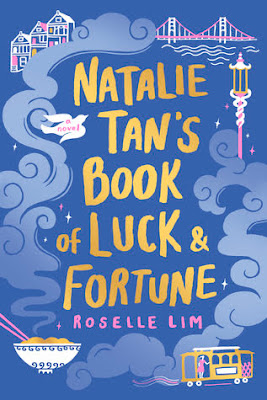 
At the news of her mother's death, Natalie Tan returns home. The two women hadn't spoken since Natalie left in anger seven years ago, when her mother refused to support her chosen career as a chef. Natalie is shocked to discover the vibrant neighborhood of San Francisco's Chinatown that she remembers from her childhood is fading, with businesses failing and families moving out. She's even more surprised to learn she has inherited her grandmother's restaurant.

The neighborhood seer reads the restaurant's fortune in the leaves: Natalie must cook three recipes from her grandmother's cookbook to aid her struggling neighbors before the restaurant will succeed. Unfortunately, Natalie has no desire to help them try to turn things around--she resents the local shopkeepers for leaving her alone to take care of her agoraphobic mother when she was growing up. But with the support of a surprising new friend and a budding romance, Natalie starts to realize that maybe her neighbors really have been there for her all along. - from Goodreads

Natalie returns to her hometown of San Francisco upon her mother's death, after seven years of being away.  When she finds out she has inherited her grandmother's former restaurant, she decides to stay and reopen the restaurant, and hopefully help the ailing neighborhood at the same time. If you're looking for a book filled with family, community, and culture, then this is the book for you!

Natalie Tan hasn't been to San Francisco since her mother refused to support her dream of becoming a chef.  She's been all over the world, but now has the opportunity to reopen her grandmother's restaurant, which used to be the center of the neighborhood.  But before she can do so, she has to help other shop owners in the area by cooking for them.  I liked the idea that Natalie has to become a part of the community and help others as she pursues her own dream.  She can see how much the neighborhood has changed, and she throws herself completely into helping it regain its former glory (even if the consequences aren't exactly as she intended).

Family is really at the heart of this novel.  Natalie and her mother were estranged, and even before that, Natalie didn't know much about her grandmother or her father.  I felt bad for her that her mother kept so many secrets and that she had to find out so much after she died.  However, I felt like we were able to get to know these family members along with Natalie as the story progressed.  Along with the idea of family is the theme of culture in the book.  The Chinatown setting really shines, and I felt like I learned a lot about Chinese customs through Natalie's journey.  And the food - OMG, don't read this on an empty stomach!  The descriptions of food and even the way it was prepared were mouth-watering.

There are some elements of magical realism that I wasn't expecting but which added immensely to the overall vibe of the book.  From the grayscale coloring of the neighborhood, to the bird imagery, to the way food literally lit people up, it was a really beautiful addition.  Along with this, Lim's writing is, for the most part, extremely elegant, and so the book just had this smooth, almost lyrical quality to it.

I only had a couple quibbles with the book.  Oddly, the dialogue was sometimes stilted, simplistic, and repetitive.  It was a bit jarring at times, but it didn't hinder my enjoyment too much.  In addition,  the romance felt underdeveloped and almost unnecessary.