Ever since I found out about the High Line in New York City, I've wanted to go there, and over the weekend I finally got the chance!

So, what is the High Line?  It's a 1.45-mile park and walkway built on the remnants of an elevated railroad freight line on the west side of Manhattan. How cool is that??  For a few years, I worked in historic preservation, so this really appealed to me, how this old rail line was saved and repurposed.  And since my husband works for a railroad, there was an even bigger connection for both of us!

The High Line runs from 34th Street south to Gansevoort Street, and there are several entrances (both stairs and elevators) to the park.  We got on at 30th Street and 10th Avenue at an area known as the Spur.  From here, we walked north for a little bit and saw views of the Hudson River and the rail yard. 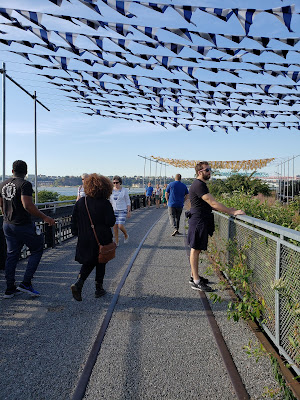 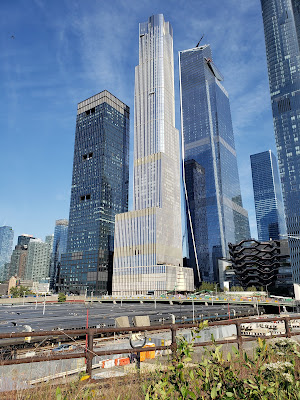 From the picture above, you can see how in some areas, the park area has enveloped the old rail bed, while in other areas, the original track has been preserved and runs alongside the walkway, like below. 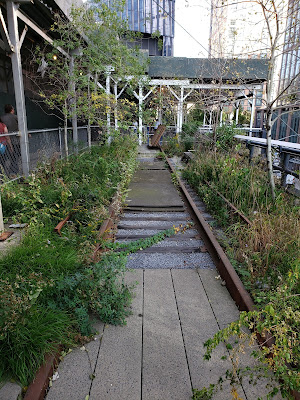 We then started walking south, and I was immediately struck by how lush and green the walkway was.  It is just surrounded by plant growth.  Even though there are buildings practically within reach, it still definitely feels like a park. 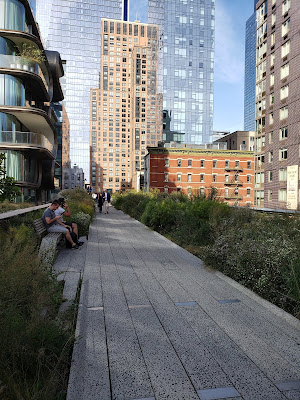 Even though the picture above doesn't have too many people in it, the High Line was actually super crowded when we went.  There were people everywhere, walking, taking pictures, lounging on one of the many benches and other sitting areas.  It was almost hard to absorb the beauty of the park because I was worried about bumping into other people!

There are several areas of interest along the way - art installations dot the walkway, a water feature allows you to dip your feet and cool down, there's an actual lawn to play on, and enough trees to make you feel completely secluded at times. 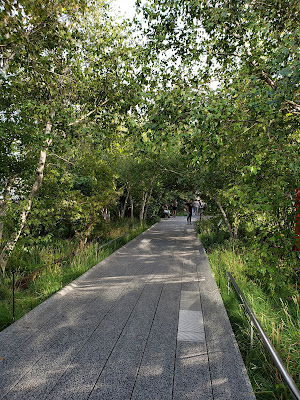 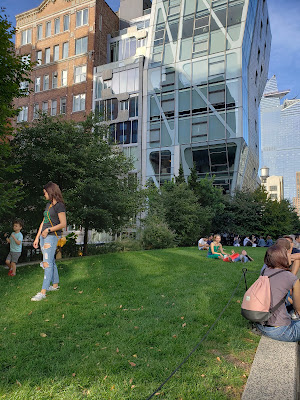 These LOVE sculptures aren't official High Line art installations, but rather part of a show from a nearby gallery - I just included them because I adore these sculptures and they're right next to the High Line! 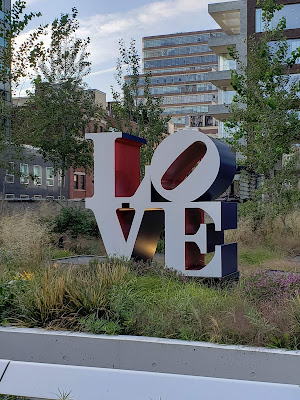 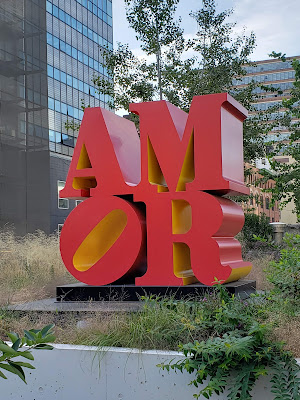 Of course, you can't be in NYC and not talk about views, and the High Line has some great ones!  Like I mentioned above, you can see the Hudson River and across into New Jersey.  The Empire State Building peeks through at turns.  If you're really observant, you can spy the Statue of Liberty and Hoboken Terminal.  But, it was also really neat to be able to look up the streets and avenues from high up! 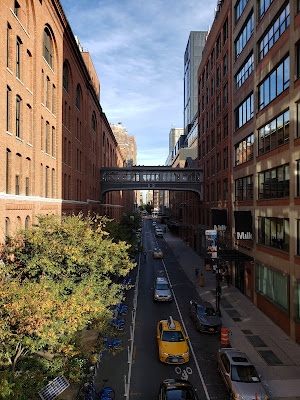 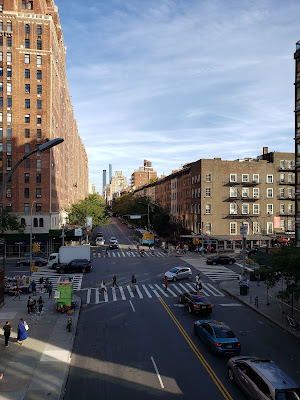 The High Line is a completely unique public park, and I would highly recommend taking a walk there on your next visit to New York City!
Posted by Angela at 3:00 AM