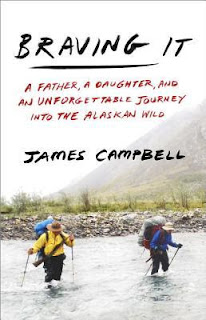 Braving It: A Father, a Daughter, and an Unforgettable Journey Into the Alaskan Wild by James Campbell (2016)

James Campbell recounts three trips to Alaska he took with his daughter Aidan over the course of a year.

I bought this book for my dad a couple years ago, as he is an avid outdoorsman, and I finally got around to reading it myself!  I really loved this travel memoir and also seeing the relationship between Campbell and his daughter grow.  Their first two trips to Alaska were to visit Campbell's cousin in the Arctic National Wildife Refuge; during the summer they helped him build a new cabin, and in the winter they helped him trap furs.  The third trip was a hiking and rafting trip with friends.

Campbell's writing is easy to read, but he doesn't skimp on the description.  I really feel like I got a good sense of the terrain and what it takes to live off the grid in the Arctic.  He isn't afraid to admit when he made mistakes and also doesn't sugarcoat anything when it comes to Aidan - when she's being a sullen teenager, he points it out.  Aidan, however, is an incredibly capable and impressive girl.  She is a hard worker and quick learner, and Campbell's pride in watching her grow, learn, and overcome her fears comes through so well.  4.5 stars 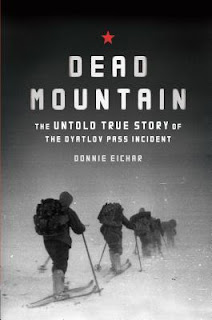 In 1959, a group of hikers was found dead in the Ural Mountains of Russia, underdressed with no shoes, some injuries, and far from their torn-up tent.  Author Donnie Eichar uses government reports, the hikers' journals and photographs, and interviews to try to find an explanation for what happened to the group.

This book was fascinating - creepy, but fascinating.  Eichar, kind of by accident, came across the story of Igor Dyatlov and his group of friends, and he became obsessed with figuring out what happened to them.  The structure of the book was interesting - he interspersed chapters of his own research and trips to Russia with a narrative account of the hikers' trip, all leading up to a final chapter, which is purely speculative but attempts to lay out what Eichar thinks happened, based on his ability to rule out many possible theories.  And the theories are crazy - was there an avalanche that chased the hikers from their tent?  Were they attacked, by animals or humans?  Did they see something they shouldn't have, like a missile launch, and were murdered because of it?  Was it aliens or radioactivity?  The context of life and politics in Russia during the 1950s added additional layers to the case.

The book was a fairly short, quick read, which was good because I couldn't put it down; I needed to know what he would conclude.  The addition of excerpts from the hikers' journal and photographs they took along their trip made it feel so much more personal.  4.5 stars
Posted by Angela at 3:00 AM