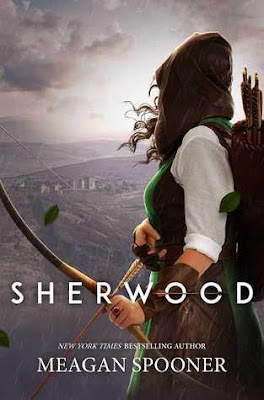 
Robin of Locksley is dead.

Maid Marian doesn’t know how she’ll go on, but the people of Locksley town, persecuted by the Sheriff of Nottingham, need a protector. And the dreadful Guy of Gisborne, the Sheriff’s right hand, wishes to step into Robin’s shoes as Lord of Locksley and Marian’s fiancé.

Who is there to stop them?

Marian never meant to tread in Robin’s footsteps—never intended to stand as a beacon of hope to those awaiting his triumphant return. But with a sweep of his green cloak and the flash of her sword, Marian makes the choice to become her own hero: Robin Hood. - from Goodreads

When Robin is killed fighting in the Crusades, Marian doesn't know what she'll do.  While trying to help a friend, she is accidentally mistaken for Robin and she realizes she has a chance to help improve the lives of those in her community.

I've never read a Robin Hood retelling and I only know the basic premise of the original story,  so I went in with minimal expectations.  Spooner is a gifted writer; her stories always have this quiet elegance about them.  However, this kind of meant that the action scenes didn't have a huge spark to them.  I never really got a thrill from any fight or heist scenes.  And I wanted more of those heist scenes; the small bits we got of Marian and the Merry Men planning and executing their missions to steal from the rich to give to the poor were quite fun.

Marian is a bit of the cliche "not like other girls" character.  Her height and archery skills set her apart and she doesn't feel particularly comfortable performing "typical" female duties.  I had to suspend some disbelief that people couldn't immediately tell she was a woman in Robin's clothes (although there were some good discussions about people seeing what they want to see, and to be fair, those closest to her weren't fooled).

The romance felt completely underdeveloped and unnecessary.  I much preferred the flashbacks to choice moments in Robin and Marian's relationship.  It just felt so real, especially how Marian remembered Robin in certain ways that others didn't necessarily agree with.  It made me wonder if that was because of his death and how things would have been different had he come back from the Crusades, and it made Marian question how well she actually knew him.