Wrecked is about a group of people who become stranded on an island after a plane crash.  This show is so funny - watching these people attempt to survive in ridiculous situations.  The third season just started, so catch up if you can!

Face Off is a special effects makeup competition show.  I'm so sad that it just finished airing its 13th and final season, but since we only started watching a few seasons ago, I'm going back and watching it from the beginning.  I'm just in awe of the characters and makeups the artists come up with each week.  So imaginative! 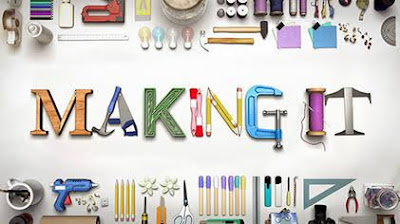 I guess I'm on a reality kick lately, because I've also been watching Making It, which is a crafting competition show.  It's hosted by Amy Poehler and Nick Offerman, who is apparently also an accomplished woodworker.  Each crafter kind of has their own specialty or medium they like to use, whether it's paper, wood, or felt.  They are so creative and inspiring!


What have you been watching lately?
﻿
Posted by Angela at 4:00 AM