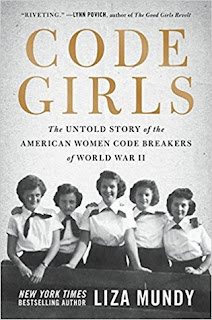 I have been looking forward to this book for awhile; not only did I want to learn more about women's efforts during World War II, but because of the secret nature of their work, the story of the code breakers who worked for the Army and Navy in the 1940s had actually never been released before.  I was impressed at the sheer number of women who joined the war effort at the government level, especially those who were specifically recruited.  They did amazing work that helped shorten the war and save lives, and they have never really been recognized for their contributions.  However, as interesting as the subject matter was, I had a lot of trouble with this book.  In the early chapters, the story kept skipping back and forth in time, which just left me confused as to when things were actually happening.  There were a LOT of people introduced, some for just a brief time.  The author included information on what codes and ciphers are and how they are broken, and I enjoyed those parts of the book, although to be honest most it went way over my head.  The book felt very wordy and the paragraphs were so long; I unfortunately found myself skimming a lot.  3 stars 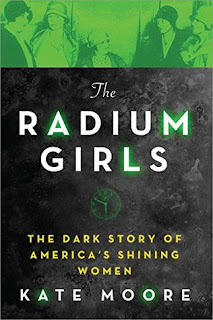 The Radium Girls: The Dark Story of America's Shining Women by Kate Moore (2017)

Starting during WWI and going through the 1920s and 1930s, women in New Jersey and Illinois were hired by companies to paint watch faces with luminous paint riddled with radium.  Assured there were no risks, the women touched the paint, ate around it, and, worst of all, put the paintbrushes in their mouths.  As the women started to get horrifically ill, they finally realized what was happening and started to take legal action.

I didn't realize that a couple of these factories were located in my home state of New Jersey, so right there I felt a connection to these women.  Reading about the physical side effects the radium caused was sickening - it ate away at their bodies, ruined their teeth and jaws, caused their legs to shorten and massive tumors to grow.  It took awhile for doctors to make the connection between their jobs and their illnesses, but even after, these poor women were still in for a huge fight.  The companies they worked for used every tactic they could to get out of paying what the women deserved - hiding medical records, moving their assets to different states, and utilizing legal technicalities to get their cases dismissed.  So many deaths, so many lives ruined - yet many of the women wouldn't stop fighting.

I didn't know about this story before I started reading, and I just flew through this book, wanting to know if the women would get justice.  I loved the way the author incorporated the women's own words; although a lot of people were introduced, it never felt overwhelming.  This is nonfiction at its best.  5 stars
Posted by Angela at 4:00 AM