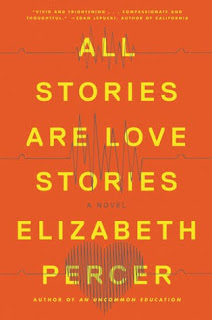 All Stories Are Love Stories by Elizabeth Percer (2016)

In the wake of two massive earthquakes, three people struggle to survive in San Francisco.  Unfortunately, I didn't love this one nearly as much as I thought I would.  I was drawn to the survival/disaster aspect of the story, particularly the intense focus on three characters.  However, there was too much character development for me.

Max and Vashti broke up 15 years ago under bad circumstances, yet they've never been able to forget each other.  Vashti decides to visit Max just before the earthquake strikes, and they are both caught in the rubble of a collapsed building.  I found myself not really caring about their part of the story.  They are trapped, struggling to survive, and all they can do is rehash their history in long, strange monologues.

Gene was a character I could root for, though.  He is a geologist trying to get to his ill husband.  His story felt much more organic and not as forced as the Max/Vashti storyline.  The thoughts he had of his husband Franklin and snippets of his career involving earthquake research made sense.  As the chapters rotated between the three characters, I found myself much more interested in Gene's (and also some secondary characters who give some other glimpses into the disaster).

I thought the writing was lovely, but there was too much extraneous detail about the characters' lives that just felt unnecessary and didn't really add to or advance the story in any way.  I also thought the theme of love was often heavy-handed and cliché.  3 stars 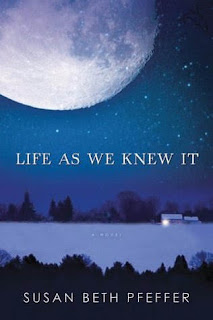 After a meteor strikes the moon, knocking it off its axis and closer to Earth, Miranda and her family must learn to adjust - and survive - in a changing world.

I loved this book so much.  I love disaster stories, especially ones like this where the author gets to be really creative in the what-if scenarios.  I was totally sucked into the story; sometimes I'd forget where I was and have to remind myself that all of this stuff wasn't happening in the real world.   Miranda's mother, although harsh at times, had so much common sense.  Way before things starting falling apart, she knew she had to start stockpiling food and water.  She just seemed to know what she needed to do to keep her family safe.

I could feel the characters' fear as their world seemed to shrink.  They lost pretty much all contact with the outside world, then their neighbors.  As the weather rapidly turned freezing, Miranda, her brothers, and their mother found themselves surviving in the one room of their house they could keep semi-warm.  I enjoyed the diary format of the book.  We really got to know Miranda and her emotions.  My only issue was that there were a lot of word-for-word conversations that one wouldn't expect to see in a diary.  4.5 stars
Posted by Angela at 3:00 AM