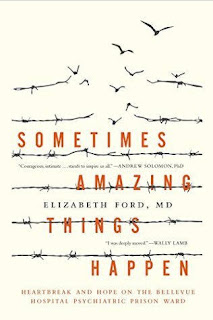 Dr. Elizabeth Ford is a psychiatrist who worked on the Bellevue Hospital psychiatric prison ward, treating mental illness in prisoners from New York's jails, including Riker's Island.  Sometimes Amazing Things Happen is a chronicle of her time on the ward; she shares stories of the patients she treated and the bureaucracy and red tape she was often caught up in.

This book definitely featured a lot of heartbreak.  The inmates have so much working against them.  They're in jail, waiting an indefinite amount of time to have their case heard, sometimes for a crime that was a result of their mental illness.  If they get transferred to Bellevue, they'll get treatment, but the downside is that as soon as they're "well," they're transferred back to prison where the guards don't know how to deal with them and they may or may not get their medications.  It's a vicious cycle.  A few chapters on how the hospital was affected by Superstorm Sandy were a stark reminder of the tangled web of the criminal justice system.  It really made me think about this lost population of men and how the system could be improved.

My issues with this book came from a couple different sides.  This book was really short, about 240 pages, and felt more like short stories than a cohesive narrative.  And unfortunately, I had issues with Dr. Ford herself; more than a few times I got the impression that she felt an air of superiority over everyone else.  She came across as seeming like she was the only one who cared about the patients, and the other doctors, nurses, and officers were overwhelmed, under-educated, and just unsympathetic.  I think it would have done her some good to realize the hard work and hours they also put in to this extremely difficult and often thankless job.  3.5 stars 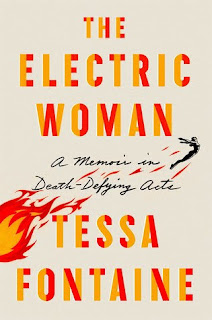 The Electric Woman: A Memoir in Death-Defying Acts by Tessa Fontaine (2018)

After her mother suffers a massive stroke, Tessa Fontaine spends years in limbo - will her mother survive?  What will her life be like?  Then, her stepfather takes her mother on a dream trip to Italy, giving Tessa a few months to join a traveling sideshow, where she performed such acts as snake charmer and the Electric Woman.

I feel like this was two different books joined together only by the fact that the two events happened to take place at the same time.  On one hand, this was a book about mothers and daughters and the sometimes difficult relationship Tessa had with hers.  Reading about her mother's health issues felt almost invasive at times, but I think a lot of people will be able to relate to it.

On the other hand, this book is a behind-the-scenes look at what it's like to work at a carnival/fair/circus/sideshow.  This part was probably more interesting to me, although it felt a bit repetitive at times.  It's not an enviable lifestyle - the hours are long, it's physically taxing, you're living in a tiny space with a lot of other people, cleaning your clothes in sinks.  However, I enjoyed learning about the different sideshow acts.  3.5 stars
Posted by Angela at 4:00 AM