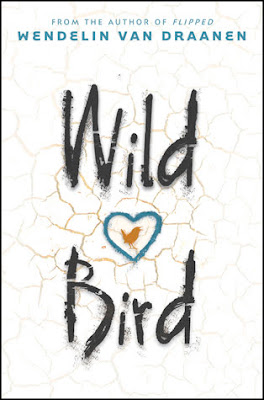 
3:47 a.m. That's when they come for Wren Clemens. She's hustled out of her house and into a waiting car, then a plane, and then taken on a forced march into the desert. This is what happens to kids who've gone so far off the rails, their parents don't know what to do with them any more. This is wilderness therapy camp.

The Wren who arrives in the Utah desert is angry and bitter, and blaming everyone but herself. But angry can't put up a tent. And bitter won't start a fire. Wren's going to have to admit she needs help if she's going to survive.

In her most incisive and insightful book yet, beloved author Wendelin Van Draanen's offers a remarkable portrait of a girl who too a wrong turn and got lost--but who may be able to find her way back again in the vast, harsh desert. - from Goodreads

Wren is an out-of-control 14-year old - she smokes a lot of weed, she steals, she lies, she destroys things.  Running out of options, Wren's parents decide to send her to a wilderness therapy program.  Wren is dropped off in the middle of the Utah desert, joining a group of other troubled young women.  As the weeks go on, Wren must decide if she's willing to change her ways.

The author did a great job capturing Wren.  I really felt like I was in the mind of this 14-year-old; her tone of voice, her actions, everything felt very quintessential teenager.  The anger she felt towards her parents, her sister, and the bad group of kids she had gotten mixed up in leapt off the page.  I could feel her resistance towards the therapy program, but I loved those moments when Wren's walls came down and she could be really honest with herself (and others) about why she acted the way she did.

The story moved very quickly.  I flew through it in just a few hours; I found myself desperate to know what would happen to Wren.  I appreciated that the author mixed in both successes and failures for Wren within the program.  It felt realistic for her to have breakthroughs but to also experience setbacks.

There were only a few downsides to this book - the program Wren is enrolled in is only 8 weeks.  I don't think that's enough time to really explore one's issues and make lasting changes.  And although the story ends on a high note, I almost wanted some sort of epilogue or jump forward into the future, to see how Wren is doing now.