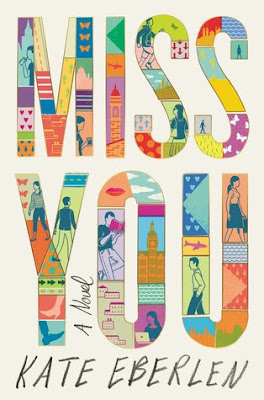 
Tess and Gus are meant to be. They just haven't met properly yet. And perhaps they never will . . .

Today is the first day of the rest of your life is the motto on a plate in the kitchen at home, and Tess can't get it out of her head, even though she's in Florence for a final, idyllic holiday before university. Her life is about to change forever - but not in the way she expects.

Gus and his parents are also on holiday in Florence. Their lives have already changed suddenly and dramatically. Gus tries to be a dutiful son, but longs to escape and discover what sort of person he is going to be.

For one day, the paths of an eighteen-year-old girl and boy criss-cross before they each return to England.

Over the course of the next sixteen years, life and love will offer them very different challenges. Separated by distance and fate, there's no way the two of them are ever going to meet each other properly . . . or is there? - from Goodreads

Miss You is the tale of Tess and Gus, but it's also a story about missed connections, family, and identity.

The approach to this story is unique.  This isn't a second-chance romance, it's not "the one that got away."  It's the stories of two people and how they finally connect with each other, after random meetings and near-misses over a period of 16 years.  The reader sees everything leading up to the beginning of their relationship and how they got to that point, with the twist that they've actually come across each other before.  It's an interesting look at fate and makes you wonder if all the people you come across on a daily basis will later have some greater meaning in your life.

The book switches back and forth between the points of view of Tess and Gus.  It's basically two stories in one, and each was fairly interesting enough that it could have been a stand-alone book.  Tess and Gus first cross paths in Florence, Italy, seeing each other at a church and later on the street.  However, they don't really talk and each returns to their own lives.  Gus goes on to medical school, while Tess' plans for college are put on hold after her mother passes away, leaving Tess to take care of her younger sister, Hope (their father is basically useless).

One thing I enjoyed a lot was seeing the parallels between their lives.  Both Tess and Gus are dealing with grief (Tess with the loss of her mother and Gus with the loss of his older brother).  Neither are living the lives they want to.  Tess feels responsible for her sister, especially after she's diagnosed with Asperger syndrome, and I felt for her.  She made so many sacrifices for her family.  Gus, on the other hand, I had less sympathy for.  He's kind of awkward and timid, afraid to tell his parents that he doesn't really want to go medical school, yet he goes through with it all anyway.  He's like a bystander in every area of his life.  Both Tess and Gus are in various relationships that are each problematic in their own way.  Neither are particularly happy, which led to a somewhat melancholy feel over the whole book.

I did have a couple issues with the book.  I felt there was far too much infidelity, in both the stories.  It was a little disappointing that the plot hinged on cheating.  Also, I wasn't crazy about the ending.  It went on a bit too long and I didn't think the characters acted consistently with the rest of the story.  A much simpler ending would have gone a long way.