Wow, I haven't done one of these in forever!  Over Christmas, I was talking to my sister and brother-in-law about books and how I was looking for something new and different to read.  My BIL suggested Astrophysics for People in a Hurry, by Neil deGrasse Tyson (2017). 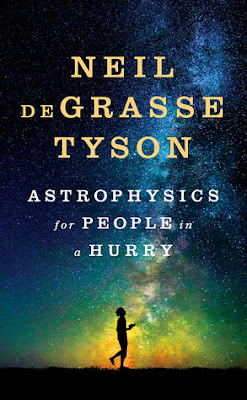 I was a bit leery.  Science fiction is one thing, but actual science?  And astrophysics at that?  Science and math were not my best subjects in school (I only passed calculus by reading over my twin sister's shoulder).  I was worried that this book would just make me feel stupid, but my BIL assured me it would not.  Deciding to trust him on this, I took a chance on it - and I'm so glad I did!

In Astrophysics for People in a Hurry, Tyson has compiled a short book touching on the major areas of his field.  I wouldn't say this book "dumbs down" the science - there were definitely sections I could have used more background or definitions - but it does give an overview on various subjects explained in a more approachable way, like bringing in comparisons to dancing or cooking, for instance.  Tyson's dry humor kept the book from getting too textbook-y and made me chuckle a few times (like when he calls dark matter our "frenemy").

I have to admit, the first couple chapters were not my cup of tea.  He starts out with some of the most abstract topics, like dark matter and dark energy.  I was more than a little confused.  But as the book went on, I became more and more interested.  Tyson talks about different types of telescopes; why the sphere is the most common shape found in the universe; and the various types of matter found in our own galaxy.  I even started reading some of it out loud to my husband.

Some of the things in the book just blew my mind; these definitely aren't topics I think about on a daily basis - how the building blocks of the universe are smaller than you can even imagine; the sheer size, scale, and even age of our own galaxy, let alone the universe; how science has come forward in leaps and bounds in such a short period of time.  It's just astonishing the things we know now, compared to even 10 years ago, and new discoveries are being made all the time.  Tyson freely admits that there are so many things we still don't understand, and his last chapter reflecting on the role science plays in society is particularly inspiring.

I may have said before that I'm not a science person, but this is one book I would gladly read again and again.
Posted by Angela at 5:00 AM

Email ThisBlogThis!Share to TwitterShare to FacebookShare to Pinterest
Labels: non-fiction, science, Try it