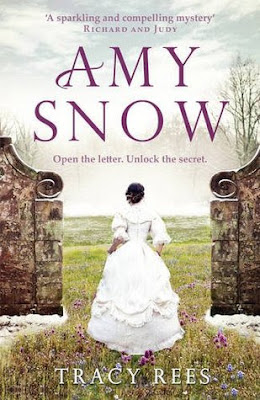 
It is 1831 when eight-year-old Aurelia Vennaway finds a naked baby girl abandoned in the snow on the grounds of her aristocratic family’s magnificent mansion. Her parents are horrified that she has brought a bastard foundling into the house, but Aurelia convinces them to keep the baby, whom she names Amy Snow. Amy is brought up as a second-class citizen, despised by Vennaways, but she and Aurelia are as close as sisters. When Aurelia dies at the age of twenty-three, she leaves Amy ten pounds, and the Vennaways immediately banish Amy from their home.

But Aurelia left her much more. Amy soon receives a packet that contains a rich inheritance and a letter from Aurelia revealing she had kept secrets from Amy, secrets that she wants Amy to know. From the grave she sends Amy on a treasure hunt from one end of England to the other: a treasure hunt that only Amy can follow. Ultimately, a life-changing discovery awaits...if only Amy can unlock the secret. In the end, Amy escapes the Vennaways, finds true love, and learns her dearest friend’s secret, a secret that she will protect for the rest of her life. - from Goodreads

This was the perfect book to read during the holiday season.  Even though there were moments of strife, fear, and heartache, overall Amy Snow was a feel-good, uplifting book.

Amy Snow tells the story of an unlikely friendship between an abandoned baby and a wealthy young girl, and the adventure the baby (now grown up) takes after her friend passes away.  After Aurelia Vennaway discovers baby Amy in the snow, the two grow up together as close as sisters.  When Aurelia dies, Amy is sent on a mission to discover Aurelia's deeply held secret, which she entrusts only to her closest friend.

The friendship between Amy and Aurelia is beautiful.  Despite her parents' hatred for Amy, Aurelia never treated Amy as anything less than a trusted and beloved friend.  Even though she wouldn't be there to see it, she wanted Amy to have a life full of adventure, better than anything her friend would have expected for herself.  I liked how the relationship wasn't perfect, though.  Amy had conflicting feelings growing up about how she sometimes had to push her own dreams aside for Aurelia's sake, and she sometimes resented her for sending her on this treasure hunt.

Along the way, Amy meets a cast of delightful (and some not-so-delightful) characters.  Most of these characters are overjoyed to meet her and ready to help her in any way they can.  It was nice to see people just being kind to each other, but I'll admit, sometimes it was a bit cloying.

I enjoyed the writing style of the book.  The language and tone were reminiscent of the classics, like Jane Eyre.  It was an easy and quick read, although at times the story moved very slowly and was often too wordy.