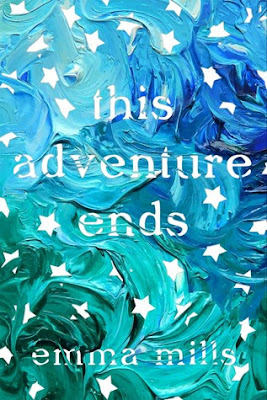 Sloane becomes closest to Vera, a social-media star who lights up any room, and Gabe, Vera's twin brother and the most serious person Sloane's ever met. When a beloved painting by the twins' late mother goes missing, Sloane takes on the responsibility of tracking it down, a journey that takes her across state lines—and ever deeper into the twins' lives.

Filled with intense and important friendships, a wonderful warts-and-all family, shiveringly good romantic developments, and sharp, witty dialogue, this story is about finding the people you never knew you needed. - from Goodreads

OMG, this cover - it's so gorgeous, I could stare at it forever.  Oh, yeah, the story wasn't too bad, either!

Sloane is the new kid in school.  She's a bit of a loner, but finds herself adopted by a group of friends: twins Vera and Gabe and former couple Remy and Aubrey.  Despite not knowing the group for very long, Sloane takes it upon herself to find a painting done by Vera and Gabe's late mother, which was accidentally sold.

This was a quick, fun read.  I appreciated that the high schoolers in this book actually act like they're in high school.  They go to class, they study, they go to dances, they have after-school jobs.  I also loved the large role that Sloane's family, particularly her dad, played in this novel.  Sometimes when I read YA, it seems like teenagers are just doing whatever they want, with no parental supervision at all.  In This Adventure Ends, Sloane sometimes actually chose spending time with her family over her friends, and her dad even joined her for a bit on her quest to find the painting.

There were some things I wasn't crazy about.  Vera is a social media maven who seems quite popular, so it was a little confusing as to why she brought Sloane into her group.  Also, Vera was just a bit too perfect.  Gabe, on the other hand, is serious beyond measure.  He rarely smiles and almost seemed robotic.  Those "shiveringly good romantic developments"? Not so much.  And the book had quite a few different storylines going on, despite its modest length.  Unfortunately, this meant the story never got really deep.  Certain parts that could have been very emotional ended too quickly and weren't explored enough.