For this installment, I've chosen Christian fiction.  I read Through Waters Deep (Waves of Freedom #1) by Sarah Sundin (2015).  I was drawn to this book because it's also historical fiction set during WWII, one of my favorite time periods to read about (okay, maybe I cheated a bit by choosing something I already knew I would like!). 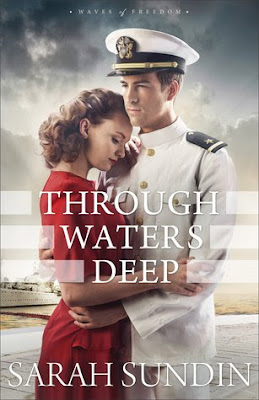 It is 1941 and America teeters on the brink of war. Outgoing naval officer Ensign Jim Avery escorts British convoys across the North Atlantic in a brand-new destroyer, the USS Atwood. Back on shore, Boston Navy Yard secretary Mary Stirling does her work quietly and efficiently, happy to be out of the limelight. Yet, despite her reserved nature, she never could back down from a challenge. When evidence of sabotage on the Atwood is found, Jim and Mary must work together to uncover the culprit. A bewildering maze of suspects emerges, and Mary is dismayed to find that even someone close to her is under suspicion. With the increasing pressure, Jim and Mary find that many new challenges--and dangers--await them. - from Goodreads

I'll be honest, I've read a couple Christian fiction books before, because I didn't realize they were classified as such when I picked them up.  It's not a genre I would normally seek out because I'm not religious; it's not a mindset or lifestyle that I particularly relate to.  But I wanted to try it again and keep an open mind.

I did have an issue with this book almost right from the start.  Mary is a secretary at the Navy yard.  Because of an embarrassing incident in her childhood, Mary looked to her faith and decided she was guilty of the sin of pride.  She spent the next several years making sure she never called attention to herself.  She downplayed all her talents, allowing others to finish ahead of her; she wore drab colors; she felt sick when someone even looked at her.  I felt so bad for her that she felt she had to live her life this way.  She could have been doing things that made her happy, like singing, but she felt this need to hide herself away.  Too much of the story is devoted to Mary's inner struggles every time she has to make a decision about anything, questioning her motives about whether she is being prideful.  She started to open up a bit when she began spending time with Navy officer Jim, an old friend from high school, and I enjoyed their friendship that teetered on romance.  Although, at times I just wanted to yell at the two of them to just tell each other how they felt, instead of just assuming they knew what the other wanted!

The historical fiction aspect of the book was something I liked a lot more.  Sundin does a great job of bringing this era to life.  The story focuses on sabotage taking place at the Boston Navy yard, in 1941, before the United States has officially entered the war.  Tension fills the air, from those who want to enter the war and those who may have loyalties elsewhere.

I don't think I would read a lot of Christian fiction in the future.  Although I did appreciate the historical fiction part of the novel, this genre is just not for me.
Posted by Angela at 7:00 AM

Email ThisBlogThis!Share to TwitterShare to FacebookShare to Pinterest
Labels: Christian fiction, Try it