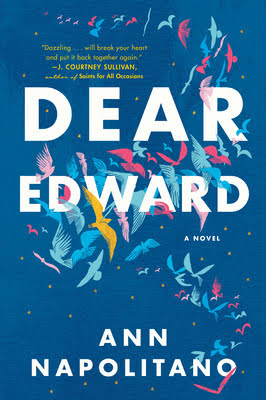 
Inspired by a true story of one child’s incredible survival--riveting, uplifting, unforgettable.

After losing everything, a young boy discovers there are still reasons for hope in this luminous, life-affirming novel, perfect for fans of Celeste Ng and Ann Patchett.

In the face of tragedy, what does it take to find joy?

One summer morning, twelve-year-old Edward Adler, his beloved older brother, his parents, and 183 other passengers board a flight in Newark headed for Los Angeles. Among them is a Wall Street wunderkind, a young woman coming to terms with an unexpected pregnancy, an injured vet returning from Afghanistan, a septuagenarian business tycoon, and a free-spirited woman running away from her controlling husband. And then, tragically, the plane crashes. Edward is the sole survivor.

Edward's story captures the attention of the nation, but he struggles to find a place for himself in a world without his family. He continues to feel that a piece of him has been left in the sky, forever tied to the plane and all of his fellow passengers. But then he makes an unexpected discovery--one that will lead him to the answers of some of life's most profound questions: When you've lost everything, how do find yourself? How do you discover your purpose? What does it mean not just to survive, but to truly live?

Dear Edward is at once a transcendent coming-of-age story, a multidimensional portrait of an unforgettable cast of characters, and a breathtaking illustration of all the ways a broken heart learns to love again. - from Goodreads

Dear Edward is the story of a sole survivor of a tragic plane crash, a young boy who has to figure out how to move forward in a life he never expected.  Interspersed with Edward's coming-of-age story are flashbacks to other passengers on the plane in the final hours of their lives.

As soon as I heard about this book, I wanted to read it, and it did not disappoint.  I was drawn into Edward's story immediately - you can't help but feel for this boy who loses his entire immediate family in one moment.  After the crash, Edward goes to live with his aunt and uncle, who had their own issues before his arrival, and he quickly forms a friendship with Shay, a girl his age who lives across the street.

The story follows Edward in the months and years after the crash, and it really is an intimate look at grief and moving on.  Edward clings to memories of his brother, Jordan, especially, continuing to wear his clothes.  He seems to almost float through life, not always noticing things around him while the crash is forever in the forefront of his mind.  He also has to contend with the fact that he has some element of fame due to the crash and he struggles with what he may owe the families of the victims, if anything at all.  Edward is fortunate, though, that he has such a strong network around him to watch out for him and help him through this time, from Shay and her mother, to his aunt and uncle, and even the principal at his school.

I liked the way the story moved between Edward's life after the crash and snippets of the other passengers in the last hours of their lives.  It was a touching juxtaposition that gave the story even more of a personal feeling, yet at the same time it almost felt a bit chilling because we the readers know their fate before they do.  Each of the passengers had their own reasons for being on that plane and Napolitano did an exceptional job creating realistic characters.