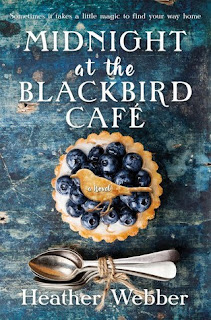 Midnight at the Blackbird Cafe by Heather Webber (2019)

Anna Kate travels to Wicklow, Alabama, after her grandmother Zee's death to settle her estate, which includes a stipulation that Anna Kate run her restaurant for two months.   Zee was known for her pies that many believed contained a bit of magic.  Also returning to Wicklow is Natalie, who has a family connection to Anna Kate and is healing from the loss of her husband.

I really enjoyed this story - it had a little bit of everything.  Magical realism, a small Southern town where everyone knows everyone else's business, family drama and secrets, and hints of romance.  It's told from two POVs, Anna Kate and Natalie, and each woman has her own obstacles to overcome.  Anna Kate is planning to go to medical school, but as the weeks pass at the cafe, she finds it hard to imagine a life away from it, and she has to decide if she'll keep a long-ago made promise or build a life in Wicklow.  Natalie is dealing with many family issues, but she also has her young daughter to think about.  Surrounding these two women are a cast of (mostly) charming people and hints of whimsy.  Magical realism doesn't work for every reader, but I thought it was a nice addition to the story.  4 stars 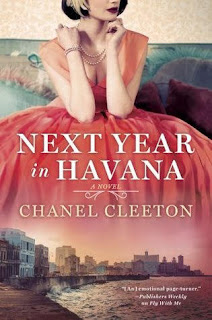 Next Year in Havana by Chanel Cleeton (2018)

This book was so hyped and that normally puts me off from reading a book, but I'm glad I finally took a chance on this one.  I really enjoyed this dual timeline story that highlighted the difficulties faced by the people of Cuba, both in the 1950s and today.  In 1958, Elisa Perez's family is part of Cuba's high society, yet she finds herself falling for a revolutionary.  I think Cleeton did a fantastic job bringing to light the fears and dangers of this period of Cuban history, although some aspects of this storyline were a bit predictable and cliche.  In 2017, Marisol is able to travel to Cuba as a journalist; her storyline also served to show how many Cubans found a home in America, yet still felt a strong connection to their homeland.  There was a bit of suspense in Marisol's story that I wasn't expecting, as well.  Cleeton's writing is strong and emotional, and the themes of family and identity really shone through.  4 stars
Posted by Angela at 3:00 AM