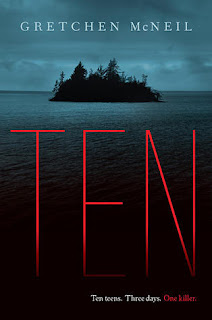 Thanks to Tracy at Cornerfolds for the rec!

Several teens are lured to a house party on a remote island, but when a storm cuts off all communication and people start dying, they realize something sinister is going on.

I was totally sucked in by this Agatha Christie retelling.  The action (and deaths) started almost immediately and didn't let up.  Knowing the twist from the original story, I was interested to see if McNeil would stay true to it or come up with something new - basically, I was kept guessing the entire time as to the identity of the killer!  The details were kind of gory in some parts, but not anything worse than any teen slasher movie I've ever seen.

I had a couple issues with the book.  There was far too much romance - people are being murdered and they can't find a way off the island, yet Meg, the main character, was so obsessed with every look and touch from her crush.  Also, while the reasoning behind the murders was plausible, I hate when the villain stops to spell out their entire plan, and it also seemed a bit too sophisticated.  Overall, though, it was a very quick, action-filled read!  4 stars 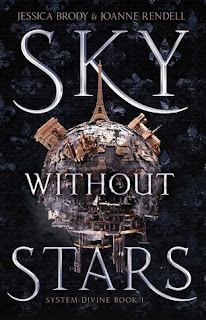 A retelling of the classic Les Miserables, set in the future on a distant planet.  Three people from very different walks of life are brought together as their world faces upheaval and revolution.

I've never actually read Les Miserables, but I have a general idea of the story, and I was impressed by how the authors translated the revolutionary times of 19th century France to a futuristic society in a far-off universe.  It didn't feel like a stretch at all that the planet of Laterre, after a few hundred years of civilization, is on the brink of revolution as most of the citizens are poor and barely surviving, while a select few are living the high life.  I loved watching the characters of Chatine, Marcellus and Alouette interact, working with and against each other.  I was probably most interested in Alouette's story, as she has spent much of her life in an underground community that houses books saved from the old world and also keeps a history of the current world.  Yep, in this world, very few people can read anymore - it's a lost art.  Although this book is quite lengthy, I never felt bored, and the cliffhanger ending made me eager for the next installment, to find out where the characters could possibly go next.  4 stars
Posted by Angela at 3:00 AM

Email ThisBlogThis!Share to TwitterShare to FacebookShare to Pinterest
Labels: 2019 reading challenges, retellings, YA