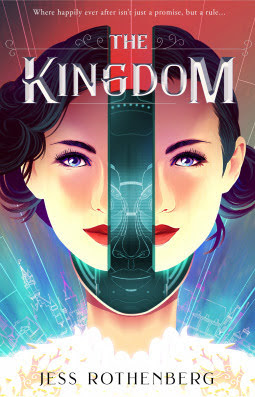 The Kingdom
Jess Rothenberg
Published May 28, 2019


Welcome to the Kingdom... where 'Happily Ever After' isn't just a promise, but a rule.

Glimmering like a jewel behind its gateway, The Kingdom is an immersive fantasy theme park where guests soar on virtual dragons, castles loom like giants, and bioengineered species--formerly extinct--roam free.

Ana is one of seven Fantasists, beautiful "princesses" engineered to make dreams come true. When she meets park employee Owen, Ana begins to experience emotions beyond her programming including, for the first time... love.

But the fairytale becomes a nightmare when Ana is accused of murdering Owen, igniting the trial of the century. Through courtroom testimony, interviews, and Ana's memories of Owen, emerges a tale of love, lies, and cruelty--and what it truly means to be human. - from Goodreads

Thank you to Tracy at Cornerfolds for the rec!

Imagine Westworld, Disney World, and Jurassic Park all rolled together; now, add in a murder mystery, and you've got The Kingdom.  This book draws on some familiar things, but still feels so unique!

Ana is our main character; she's a Fantasist, a very human-like android Princess in The Kingdom.  Her job is to make dreams come true for the park guests.  Most of the story is told from her POV, but there are also trial transcripts and post-trial interviews from after Ana is accused of murdering a fellow park employee, Owen.  There's an innocence, almost a naivety, to Ana at the beginning of the story, and it was neat to watch her evolve, learn new things, and experience new emotions, especially as she meets and gets to know Owen.

Although eventually I was able to guess the truth behind Owen's murder, there was a sense of unease at times.  Ana is supposed to be incapable of harming someone or telling lies - could she have figured out a way to overcome her programming?  Was she stalking Owen?  In her mind, their relationship seemed real, but was this actually true?  Rothenberg wasn't afraid to go dark in other areas of the book, particularly with Ana's "sister" Princesses, so it made me wonder if something else was going on.

Speaking of the other Princesses, there are a lot of them.  Most of them really get nothing more than a passing mention, so those characters felt a bit flat to me.  They are supposed to be representative of the world's population, but in my head they all felt mostly the same because there is so little description of them.  We really only get to know two of them - Nia, Ana's best friend, and Eve, the oldest model Princess.  Their side stories added depth to both the world-building and Ana's story.

Speaking of world-building, it was incredible in this book.  The Kingdom is this massive fantasy theme park, with so many different areas - a lagoon, a castle, a winter wonderland, a rain forest, a safari - practically anything you can imagine.  It's no wonder it's such a popular place for people to visit.  The transcripts also give insight into the Princess program, how the androids are created and where they live - and also how they're protected from knowing too much about the outside world.