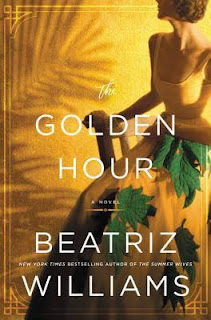 The Golden Hour by Beatriz Williams (2019)

Journalist Lulu Randolph travels to the Bahamas during WWII to report on the Governor and his wife, who happen to be the Duke and Duchess of Windsor (the British king who abdicated for his love, Wallis Simpson).  While there, she discovers some not-so-savory things about the couple, while also meeting and falling in love with Benedict Thorpe, who is not who he appears to be.  In another timeline, we meet Benedict's mother Elfriede and follow her difficult journey.

I love Beatriz Williams' books, and the addition of royalty in this one made it even more of a draw.  I was expecting more action, intrigue, and drama - I felt like Williams kind of glossed over those aspects in order to play up the romance more.  This book felt more like a character study, especially with Elfriede's storyline which focused on her tragic romances and difficulties with motherhood.  Although interesting, I almost could have done without this storyline in order to have more with the Duke and Duchess.  However, as always, Williams chooses interesting time periods and settings, and her beautiful writing really makes you feel like you're there in the midst of it all with the characters.  4 stars 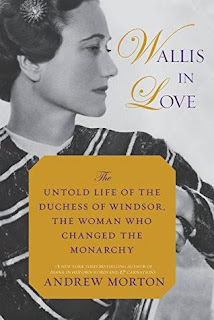 In Wallis in Love, biographer Andrew Morton recounts the life of Wallis Simpson, the woman a king abdicated for, through research including letters, interviews, and diaries.  Most people may know Wallis as the central player in a huge royal scandal - King Edward (a/k/a David, the Duke of Windsor) gave up his throne in order to marry her, a twice-divorced American.  But who was she before the controversy?  And what was their life together really like?

I enjoyed Morton's writing style - it's easy to read and a little gossipy, perfect for a tell-all like this.  Knowing her previous divorces were a bone of contention in her relationship with David, I was eager to find out about her other husbands.  It seemed she rushed into some things without properly weighing the consequences, and at other times was on the lookout for the next best thing. She was a social climber, no doubt!

Morton opines that Wallis' friend Herman Rogers was the only man she ever loved, despite her three marriages.  He asserts that Wallis went after David because she had an intense desire to become Queen, but I don't think the evidence supports this, or that she was miserable in this marriage.  I mean, she stayed with him for decades, when there was really no chance of her gaining significant royal status (other than the Duchess title) and David obviously adored her.  Overall, though, this was an informative look at a woman who had an enormous impact on the British monarchy.  4 stars
Posted by Angela at 3:00 AM