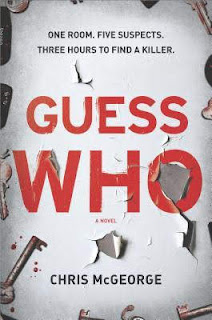 TV detective Morgan Shepard wakes up in a hotel room with five other people - and a corpse in the tub.  If he can't figure out which person in the room killed the man in the tub, they will all die.

When I first read the blurb for this book, I immediately thought of the Saw movies.  And it kind of started out like that, opening immediately with Sheppard and the others waking up and discovering the body.  I wondered who they all were, if they were randomly thrown together or if there was some connection, and if any of them were lying.  Interspersed through the narrative are flashbacks to Sheppard's childhood and it becomes pretty apparent who is setting him up.

While I enjoyed the first half of the book, my interest began to wane as the initial mystery is replaced by another.  I thought the writing was good, though, and the relatively short chapters kept the pace moving quickly.  I rolled my eyes a bit near the end, though, when (MINOR SPOILER ALERT) Sheppard and the villain come face to face and instead of taking out Sheppard immediately, the villain proceeds to monologue his entire motivation and plan.  Come on, villain, you know how that's going to work out for you!  3.5 stars 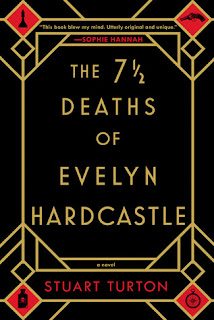 Aiden Bishop has 8 days to find a killer.  The catch?  The day of the murder will keep repeating itself until he solves it, and each day he will wake up as a different guest in the crumbling mansion he's found himself in.  He will only be free once he solves the murder of Evelyn Hardcastle.

This was a highly imaginative and unique locked-room mystery.  Not only does the main character have to solve the murder, but he will see it from the viewpoint of several other people staying at the estate.  Each "host" felt distinct; some were cunning and intelligent, while others had more physical prowess.  Aiden has to learn to use the strengths of each one without letting them overwhelm him.

Turton did a brilliant job creating the atmosphere; I felt so immersed in the story and the setting, which was a good thing because this book really needs your attention.  It's so easy to miss little things.  And then there's a huge twist at the end that will totally change the way you look at the story and, for me anyway, leave you with more questions than answers!  4 stars
Posted by Angela at 4:00 AM